When I first set eyes on the house it was a wet and miserable February, twenty-six years ago. It had not been lived in through the previous winter, and had been put on the market half-way through some major renovations. It was uninhabitable when we bought it, and only barely livable when we moved in, in the summer of ’93. There were no doors in the kitchen – then again there was no kitchen. We were proper blow-ins back then, with a copy of John Seymour’s ‘The Complete Guide to Self-Sufficiency’ in one hand, and an Enya CD in the other.

Over the years we colonised one room after another to create the indisputably lovely, if somewhat shabby chic, family home that it is today. It has taken time, money, blood, sweat and tears only surpassed by raising four daughters in it. I wish I could say that it is finished. Or that it will ever be. Though it pains me, I know that I will never be able to step back from my immaculate house and say: “My job is done.”

A word of caution to those of you dreaming of renovating an old building: You will dream on decades after you buy it, because it never ends… This is particularly true for those of you who harbour dreams of restoring a big, period house. Dream on…there will always be something more urgent to be done, asap. The paradox of a big old house in the countryside is that it can both generate wild burst of pure fantasy (Let’s turn these two small rooms and pokey hallway into one big room! Let’s take the flat roof off and build a glass covered mezzanine!) with the harsh slap of reality (“What’s that noise? Is that water? It’s coming through the ceiling!).

You see the thing about an old house is that there is always something left to finish, which you never get around to doing because something else has broken down in the meantime and needs repairing. Unless you have a pile of money to keep up, hard decisions have to be made between decorating a room and replacing the immersion. Never having had what could be called a ‘steady’ job, home improvements planning is more like triage in A&E. Plumbing comes before heating. Clogged soak-aways and full septic tanks need one, maybe two, consultants to step in. Electrics trumps everything (no electricity equals no water).

Over the years, walls have been plastered, drains have been built and improved; electrics, plumbing and gutters have been installed and repaired many a time (three immersions so far), facias and soffits replaced…the list goes on and on. Sometimes the improvements are visible, like finally getting an ensuite shower room in my bedroom two summers ago. Most of the time they are of the invisible kind. The sort of essential and expensive improvements that no one notices. You’re hardly going to have friends around to show off the new immersion, are you? In fact, even if you were daft enough to do that, most of the really important improvements are behind walls, or buried under ground, or up on the roof. Thousands of euros and nothing to show for it. Until now.

This summer I will finally have a home improvement that I can show off. I’m having the house painted. After 26 years of dull, lifeless, grey, we’re getting a makeover. I hadn’t planned to paint the house. In fact, it was way, way down my list of potential jobs for this summer. The most urgent was getting the gutters cleared and fixed. It should have been done last year, or even the year before. Over the last two, wet, winters the house developed several gushing waterfalls after a heavy rain. Ophelia probably didn’t help. The one near my bedroom was so disconcerting that it would wake me up at night (What’s that noise? Is that water?). The man who fixed the gutters offered to power wash the house while he was at it. I thought that sounded great. The funny thing is that I thought the house would look freshened up without painting. Dream on. After the power washing the grey walls did look squeaky clean, but the windows and surrounds looked like they’d been heavily exfoliated, which in a sense they had been. The house looked worse, not better, so funds were shuffled, quotes requested, and paint catalogues poured over.

It will take a few weeks, but if you’re around my neck of the woods, pop around so that I can show off. We’ll be the big, old, RED house on the hill.

Tue Jun 4 , 2019
Have you ever watched a movie and wondered why the bad guy always has a scar on his face? Maybe you haven’t noticed, but if you sit and think about it, the archetypical bad guy in every movie, TV show, sitcom and even cartoon, always has some form of a […] 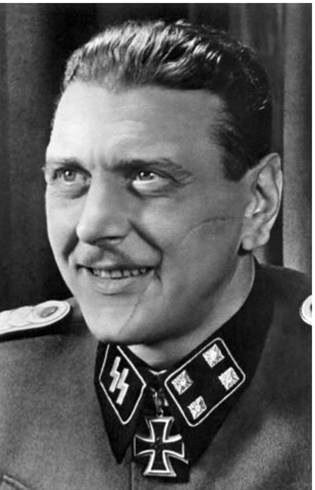