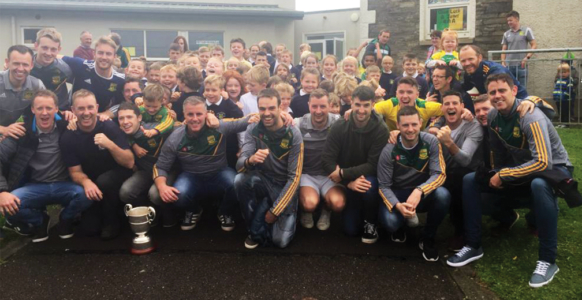 St James’ Junior A footballers captured the Bandon Co-Op South West Junior A football championship title for the first time in their history after they defeated Ballinascarthy by two points, following a thrilling divisional final clash played in Timoleague on Sunday, September 22. There were euphoric scenes of delight when Joseph O’Sullivan lifted the Mick McCarthy Cup, as the jubilant Saints players, coaches, committee members and supporters celebrated the greatest achievement in their history. John Bohane catches up with their delighted team captain Joseph O’Sullivan, club chairman Niall O’Sullivan and long serving goalkeeper Diarmuid O’Donovan following their divisional football championship success that will live long in their memories.

Ace goalkeeper Diarmuid O’Donovan played a huge role in helping St James’ win the junior football championship title. Along with his defenders, he didn’t concede a goal during their five championship games played this season, which was a key factor in their success. The experienced custodian was thrilled with their championship success. “It was a great win and a huge achievement for the club. We have won counties and Munster titles before, but this win was huge. We have been struggling for numbers at underage level and this win is a great boost for the club. We will take the cup around the local schools and it will inspire the next generation of players. It is great for the underage players within the club to see us winning titles and hopefully it will inspire them to keep working hard and developing as players.”

When the full-time whistle sounded to signal a hard fought win for St James’ in the divisional final, it sparked unprecedented scenes amongst their loyal and proud supporters who invaded the pitch to congratulate and celebrate with their local heroes. Diarmuid was delighted they achieved success for their passionate fans. “They were great all season. It was great to win for them. There was a great build up in the area before we played the final. People flew home especially for the game and the parish was adorned with flags and banners. The support was brilliant on the day of the final. It meant a lot to all the players. It was great to repay their belief and support in us with victory.”

St James’ had a team full of heroes who propelled them to victory against Ballinascarthy. Young captain Joseph O’Sullivan had the honour of lifting the Mick McCarthy Cup. Diarmuid is full of praise for their outstanding leader. “He is a very good player. He has been a great captain all year. It was a shrewd move by the management team to pick a younger guy to captain the team as we have a very experienced team. It showed their belief in the younger players. We have a team full of leaders who all played their part in our win.”

Diarmuid has been a key player for St James’ GAA Club in both codes all his life. He has played in many a great victory, while he has also succumbed to tough defeats during his impressive career. Did he always maintain his belief that St James’ would ultimately prevail in a divisional championship? “We always maintained hope down through the years. We got to a few semi-finals in recent years, which was encouraging and showed we weren’t far away. As the years go on, we thought we might have missed our chance. We kept plugging away and thankfully it all came good. A lot of the panel won the county junior B title in 2005. It is great to win the titles in both the A and B grade.”

Another key ingredient in their historic breakthrough was the great unity on display during their final showdown against Ballinascarthy. Diarmuid pinpointed their close dressing room as a big factor in their success. “We are very close friends, both on and off the pitch. There is a great camaraderie in our dressing room. Outside of football, we always mix. There was just a great buzz all year. We worked hard at the start of the year. We did a lot of work with a physical trainer, which helped. Out fitness levels were also strong which helped us see off Bal when they were throwing everything at us in the closing stages.”

The modest goalkeeper, who performed excellently all season, was full of praise for his defence who were brilliant all season. Going the whole season without conceding a goal reflects the quality of their defensive rearguard. “They have been unreal all year. They have worked so hard. They are a great bunch of lads. We have great competition for places, which pushes lads also. All the backs offered great protection in front of me all season. Not conceding a goal was down to the whole team.”

St James’ team captain Joseph O’Sullivan was still coming to terms with their triumph. He paid tribute to his colleagues for their divisional success. “Our success was built on hard work. The players have given everything in their pursuit of glory. I am especially delighted for the older lads. They have really driven this on.”

Joseph also waxed lyrical with regards the management team who have been involved with the St James’ junior footballers this year. Alan O’Shea who produced a man of the match display in the final with five points, Diarmuid Keohane and Kieran Callanan have played huge roles behind the scenes in guiding the Saints over the line. “Alan has been great since he got involved. He was brilliant in the final. He kicked huge frees when the need was at its greatest. They have all worked well together and they have helped us enjoy the best moment of our career. We are very grateful to them for their assistance.”

The half-back will always treasure the moment he was presented with the Mick McCarthy Cup by Carbery Board Chairman Tom Lyons. “It is a moment I will never forget. It was a magical moment. It was a very proud moment. It was a huge honour on behalf of the team to accept the cup. It means a lot to all involved within the club. Getting to a final was great. Bringing the cup home was extra special.”

St James’ club chairman Niall O’Sullivan understandably cut a contented man in the immediate aftermath of the game. The club official was thrilled with the nature of their win. “It was a superb win. The atmosphere was brilliant. Our fans were great. I don’t think there was anyone left in the parish. The players are great ambassadors for the club and their families. The players have been amazing. They deserve all the praise. They are honest guys. They all train our underage teams, which builds a connection. They will inspire the next generation of players to come through. It has capped a great week for the club. We have achieved a lot of underage success in recent days, which shows the future is bright going forward. There is a great spirit within our club and our community. There is a great sense of pride and unity in all our sporting clubs. This is our sixth title we have won this season. We started the year off with great success in the Scor competitions. That helped build momentum and it is great to win the SW Junior A football championship.”

Niall has proved a very diligent club chairman during his tenure with his beloved St James’ GAA Club. He acknowledged the huge role previous club officials have played in their success. “The foundations were very strong when I came in two years ago. We have a great committee, full of proud club people. We have various groups working hard behind the scenes, which is a big help. Previous chairmen have done great work. They are heroes, as they kept the club going during some lean times. They have built the club up to where it is today. They have invested substantial funds in improving the facilities for the players and the community. Now, we can finally say we have our name on the Mick McCarthy Cup. We have reached our holy grail and the pinnacle.”

Lisheens House is coming to Clonakilty

Tue Oct 8 , 2019
Lisheens House is spreading its wings. The Skibbereen based charity is opening their second used furniture shop in McCurtain Hill, Clonakilty on October 10. This new shop, located above the Garda station, will have over 5000 square feet of quality used furniture for sale.   Bantry woman, Noreen Murphy, who […]