After over 30 solo albums and over 55 years in the music business, Roy Harper still has a lot to say. Although 77, he says, “I’ve never thought of myself as old yet”, but admits that this will be his last tour.

WCP: You’re often classified as a folk musician.  But to my ears you’re a singer-songwriter in the mould of many rock musicians. What do you classify yourself as?

RH: “I never thought of myself as a folk singer. It did pass through my mind in ’64, ’65. Then in ’66 I was being thrown out of folk clubs because nobody could understand the things I was singing about. I quickly learnt in the mid 60s that I wasn’t a folk singer — I was something else — I was kind of a poet on wheels. Then I kind of gravitated to rock, where I was getting a lot of attention from those guys. I grew up with the same management as Pink Floyd for the first few years. And also Marc Bolan was one of my best friends and I knew David Bowie. There was a kind of school there that we all belonged to. We weren’t anything other than just what we were doing, you know? We loosely became attached to rock in a weird sort of way — all of us. We didn’t belong anywhere.”

WCP: When you say that they didn’t understand you, was it the language, the context, or what?

RH: “It was the context really. I don’t think anyone understood I was on world-watch — I was always watching what people did, what humanity was doing. The problem with me was my songs weren’t ‘Boy meets girl.’  The majority were about the world-watch that I was making throughout my life. It’s very difficult to actually marry that with the pop medium. The records all needed notes, which they’ve now got. This last 20 years I’ve been adding the right sort of notes to the records just to actually allow them to be understood by people. Once you’ve thrown that light on them people can actually understand them. There wasn’t a hope of doing that in 1970 or 1975. Nobody wanted to read liner notes. It was Pop Idol — it was image and sound. There was no literature involved in it. Liner notes on a pop record was unheard of at that time. We were labelled by the papers, by the media because how else were they going to be able to understand us? You were going with a certain image, so you were lumped in with pop. You can de-select that nowadays, but you couldn’t then.”

WCP: What about West Cork made you decide to first come here?

RH “In 1973 I ran away from the music business. I was fed up the back teeth of it! I just got in my car in London and drove west. And I didn’t think of anything till I got to the west of Wales. I began to see signs for ‘Ferry’, and I thought, ‘Ferry? Where to?’ I ended up in Wexford and driving west again and I ended up a day later on a beach down in Baltimore. I realised that there were mackerel in the water by the jetty as soon as I got there, and I thought, ‘That’s my breakfast’. So I went into Skibbereen and I got myself a line and a spinner, a pan and some margarine. I slept in my car and I was there for 10 days. And it was a really beautiful – it hardly rained. That was my first experience of West Cork.”

WCP: What made you decide to stay here?

RH: “So when it came to it, about 30 years ago, it was gonna be either New Zealand or West Cork. And we chose West Cork. Clonakilty is one of a kind — it’s an original. There’s a lot of people in Clon who’ve taken care of it. When I first came here 30 years ago it was a grey little town. But it’s grown into something that is really attractive. On a sunny day in the summer there is nowhere else where you’d rather be — here is perfect!”

WCP: You once said, “I am the exile…it’s my most serene default position.” I think you’re still in that position?

RH: “I’ve never grown out of that position! Unfortunately, I grew up with a step-mother who just didn’t like me. And it was mutual! So I spent a lot of my childhood alone. I never had a mother and that’s weird! It turned out really well because what I ‘did’ have is an inner strength. It’s the kind of strength where you don’t mind being an exile and you find out that’s what you are eventually. That’s what you become. It started very early—it started at about four. So it’s a default positon, yeah.”

WCP: You’re embarking on a tour of Clonakilty and Britain. Will this be your final tour?

RH: “I don’t really like touring. Get me onstage and that’s perfect. Touring — I grew out of that right at the beginning. I wasn’t really attracted by that life at all. When I’m on a stage then I’m in my element. But it’s getting me there.

“It’s been in the air for some years now. I can’t do this again. So long as I keep an hour’s worth of songs loosely rehearsed, then I can go anywhere and do a gig. So it won’t be the last gig, but it’s definitely the last tour. Absolutely for sure! It’s incredibly expensive all the way round – mostly on the body and mind.”

WCP: How hard is it to make a living in music nowadays compared with years ago?

RH: “When I first started in ’64, ’65, when I decided to dedicate myself to music as a life, it was really, really difficult to get on the ladder. You had to have a number of things: a really good image, really good voice and a really good presentation. You had to pass the audition, so to speak. The audition was very, very testing – always. You either did that or you climbed slowly, like I did. The average record companies would have interviewed me and immediately recognised how eccentric I was and that wouldn’t have worked. I would have been sacked straight away. It was very difficult to start with, but then when I jumped those first few hurdles, in 1969 it became a whole lot easier. I had three albums behind me, which had all been made in roughly a day – they were all a list of first takes. So they knew that I could make a record. So the fourth record [Flat Baroque and Berserk] was made under very different circumstances and it became a minor hit. It got to about number five in the charts for about a week. They expected the same again but they got Stormcock and they ‘absolutely hated’ it! They rejected it before they even heard it. They heard the rumours coming from Abbey Road and that was enough.”

WCP: “I think it’s a masterpiece!”

RH: “Thank you. I agree. It’s now got to the stage where there are so many people recording that it’s really difficult again now because the pot is too deep. To actually emerge from the pot into stardom, as it were, is more or less a fluke. Don’t forget Adele failed three or four times. It’s like the Lotto. It is that deep now — there are hundreds of thousands of people recording stuff at home or otherwise now. The people with oomph, with something about them are going to break through, but they’re often not the best people. Often the genius is left in the bedroom. You have to have been doing something special for quite some time to get through—it’s not easy anymore. There’s many things that come into the mix: what state is society in right now?

“Society is poorer than it was 10 or 20 years ago. It was a much wealthier world than it is now. It’s not a good time because of the number of people on the planet now. Everything is under pressure. The welfare system isn’t fit for purpose or anything like what it was designed to be when it was first invented. It turns life into a huge search for health. Health systems are very often the biggest institutes, organisations or corporations in any given country. And that’s a pressure that didn’t exist even 20 years ago. All people want a better lifestyle and it’s not really equating. Well, what it equates to is that the bottom 10 percent have fallen out of the bottom — are living in poverty again — and that’s not good.

“And there are young people trying to get out of that using what they’ve got, and some of them are very good — with instruments and voice or whatever — but there are so many of them. It’s the same the world over. We’ve got all the schemes in the world that we want to accomplish, but we can’t because the finances, the resources aren’t there. The power to earn the money isn’t there. It’s the wrong way to live. It’s resulting in boom and bust. We should be living more evenly. We should find a way where greed isn’t what we subscribe to. We can actually exist for each other in a much better sense than we are doing at the moment — we’re all in a kind of freefall. You can talk about freedom in one sentence, but then you have to talk about the curtailment of that in the next sentence. You have a dilemma there with freedom.

“I heard last night that 40 percent of the invertebrate life on the planet is in danger of dying off; at which point food becomes scarce. Where do we draw these lines? When do we finally accept that we cannot carry on the way we’re doing? How on earth do we address that? These questions have always occurred to and I’ve written about them, but no one’s taken a blind bit of notice. It’s something we can all think about.”

WCP: To coincide with your upcoming gig in De Barra’s Folk Club, you said previously that it reminds you of the folk clubs that you grew up with in the 60s.

RH: “It’s got the same kind of ethic that I knew in the 60s: turn up, bring your guitar or whatever, set yourself up and sing. The town is the right size to incorporate that. If it was a big city it would suffer the usual slings and arrows of the marketplace. But in Clon it’s sort of hermetically sealed from that — it’s like going back to into the last age and having a little taste of what it used to be like. I know that, I enjoy that. It’s a freak that it’s there, and we lose it at our peril! It’s a great venue!”

WCP: An old article claimed, “That he won’t be famous until after his death is a Harper fixation.” Is this true?

RH: “There’s likely to be some re-visitation after I’ve gone. I’m aware of the fact that I’m too much of an obstruction. If I’m dead the canon stands alone, then it’ll be better off. In any case, most of what I’ve written is a storyboard for everyone. People after me can use it — on which they can plant their own music or stylisation of it. I’m in the way of myself.”

Roy Harper plays De Barra’s on Sunday March 3, (This is my gig of the month). Tickets €28 from debarra.ie

If you have any comments or events, you can contact me by email gary@westcorkpeople.ie.

Mon Mar 4 , 2019
The 58th West Cork Drama Festival opens in the theatre Rossmore on Friday, March 8 and runs until Saturday, March 16. A rich miscellany of drama will take to the stage with a something to please everyone. Irish Classics (Philadelphia Here I come, The Beauty Queen of Lennane and The […] 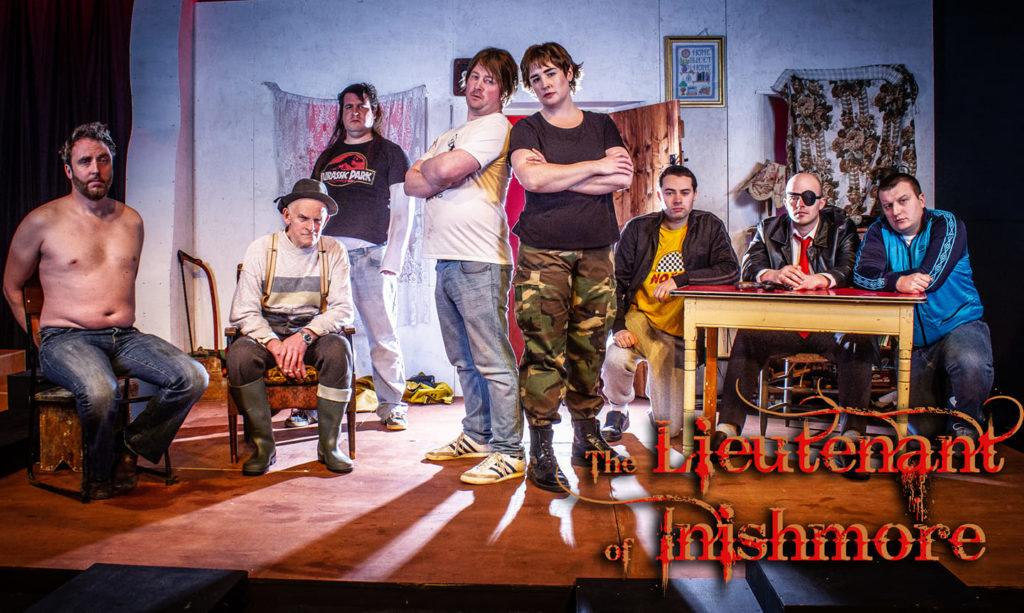