Traditional guitarist, Jim Murray has toured the world many times over – with Sharon Shannon, amongst others – but he loves West Cork more than ever. Gary catches up with him in his local, The Mountain House in Ardfield.

WCP: “How would you describe your musical upbringing?”

JM: “My dad had a céilí band and I was just immersed in music. So my whole life at home was just music really. My Dad, he would just never stop singing. I remember when we were driving, he wouldn’t be saying too much in the car, he was just singing and whistling the whole time! But the thing is, it was never ‘ever’ forced on me in ‘any’ sense of the word.

“I still remember the first time I ever learnt to play my first tune on piano. The only memory I have when I was really young was going upstairs in the morning and just dragging both my parents out of bed to come listen to a tune that I could play. It was something simple, but I was ‘so’ delighted that I could do it! I always had that obsession with music as a youngster.

“I can’t read music. I developed almost a phobia of reading music. What happened to me was I started very young. I started playing piano when I was about three. When I was four, I started playing button accordion. I was quite good at it very young. I was meant to go into a school class system, where you do three or four years with a lady, and when you graduate from her you went in with the band (a recording band in Macroom). “I was put straight into the band, and missed the four years of theory. I always felt inferior to those who were reading music. I learnt by ear. But I’ve got along okay so far without it!

“I’ve been doing solely music professionally again since March. I’m saying yes to a lot of things that I never said yes to before, as I didn’t have the time. In January I’m doing an Irish Music Network Tour. And I’m just starting to do this: I’ve this thing called JimMurrayMusic.com – an online music tutorial so people can learn how to accompany Irish music. I’m gonna give it away so people can access it for free, and build up the Skype lessons. I have a lot of interest from all over the world really. So I can work from home. It’s great! I do all the Sharon Shannon work – I’m going off to Japan next month – but not as much touring as I used to do.”

WCP: “So it’s not that hard after twenty years of music to make a living now?”

JM: “I think so yeah. I’ll do some teaching in West Cork too; if people are interested they can contact me.”

WCP: “Is there anything special you like about West Cork?”

JM: “God I ‘love’ West Cork! You know, the longer that I’m here and the older that I get, the more I travel, the happier I am to be here! Isn’t it funny? It’s not just the beauty of the place, it’s the people really, the way of life. I can come in here any night and talk to these people. They’re great, lovely people. I think we’re lucky here. We have tourism, but not too much.”

WCP: “What are your favourite gigs to play?”

JM: “I love Japan, I love Australia. But De Barra’s is probably one of my favourite gigs I could do – with anyone! It’s a great crowd. And even all the bands that I play with, they all love De Barra’s. There’s something very special about Cork audiences. Playing with different people, they always say, ‘Jesus, the reaction you get in Cork is great!’ There is a huge appreciation.”

JM:  “I’m really proud of an album we did in 2005, Sharon Shannon, Frankie Gavin, Michael McGoldrick and me, called ‘Tunes’. I produced all the accompaniment, with really great bass and percussion. It’s one of those records, when I meet people they talk about it.  Everywhere I go people reference it. I really like it.”

WCP: “What’s the key to accompanying?”

JM: “If you’re accompanying people there’s a real art to it. I’m not saying that I got it down or anything. You have to listen and it’s just really tuning in your ear to it. That’s kind of subtle, you know? I pride myself on that. Try to be tasteful of it. You need the ability, and a good sense of what’s right. I was told by the great Irish bassist, Tony Molloy, that 70 per cent of it is listening to what they’re doing. I really took that onboard.

“I played the accordion for years, which was really helpful. So when I started accompanying the music, I actually knew the melodies – I wasn’t just glossing over it. I’m not blowing my own trumpet, but I was in Denmark a couple of weeks ago and we played in a bar late at night. I played a tune for this guy and he started crying! That’s what music is, isn’t it? Those moments when the hairs on the back of your neck stand up. But I think to be hit with music like that it’s more the minority of people. Maybe I’m wrong.”

My gig of the month is: the best Irish music comic, David O Doherty in De Barra’s Friday November 8; Tickets: €18.

Wed Nov 6 , 2019
The marketing people at Citroen are always keen to push their very stylish DS brand as a separate entity. It’s a difficult task and will take time as most motorists tend to include the DS brand in the Citroen stable. Of course they are correct as the DS, Citroen and […] 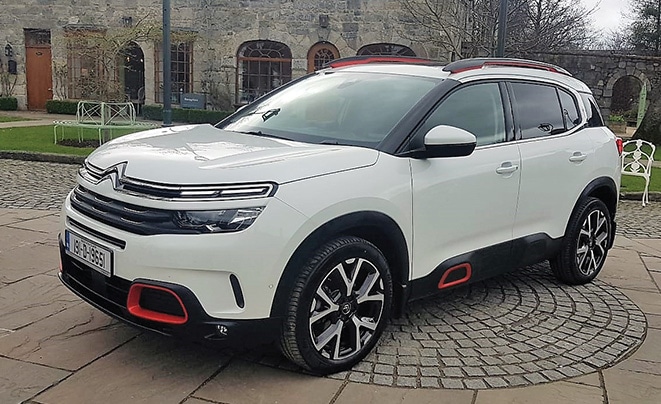