2019 will see a number of Irish agricultural anniversaries take place. Bord Bia will be in existence 25 years. The food marketing body was founded in 1994 as an amalgamation of the Coras Beostoic agus Feola (the Irish Meat and Livestock Board) and the food promotion activities of the Irish Trade Board. This took place during the ministry of Cork South West TD, Joe Walsh

There’s a strong West Cork influence at the top of the organisation with Clonakilty woman, Tara McCarthy, CEO and Dan McSweeny, the former CEO of Carbery group serving as chairman.

There is also a big national agricultural centenary this year. Less than a week after March 29 and the UK’s proposed leaving of the EU, the Department of Agriculture will celebrate its 100th anniversary. Maybe it is as apt that confusion and uncertainty reign now just like in 1919. While the incumbent minister has spent a lot of his time in office running around the world on trade missions to ease some of the potential fallout of British policy, things were a bit wilder 100 years ago. The first man to head up the ministry was actually on the run from UK authorities during his time in office.

The first minister for agriculture or director of agriculture as he was known was Wicklow TD Robert Barton. Having escaped from Mountjoy on the eve of St Patrick’s Day in 1919, he was tasked with developing the Department of Agriculture and did so until his recapture 10 months later.

The position had no seat at cabinet at the time. Instead, the Wicklow TD was called to attend certain meetings. Arthur Griffith represented the department at the cabinet table through his role as minister for home affairs.

Agriculture House on Kildare Street is a far cry from the headquarters used in the early days of the department. The first office of the newly formed entity was at 44 Oakley Road, Rathmines. This was the home of Áine Ceannt, widow of executed 1916 leader Eamon Ceannt. Following work on promoting the Land Bank, Barton subsequently moved his office to its facilities on Leeson Street.

Civil servants and advisers were in short supply during the creation of the state. With no typist available, all official work was carried out in Barton’s own handwriting on duplicated paper.

Robert Barton was rearrested following an Irish Agricultural Wholesale Society Ltd (IAWS) meeting in the Mansion House on 31 January 1920. The ministry was run by Art O’Connor during Barton’s imprisonment in England.

On the home front

There are a few anniversaries on the home front too. This year will be the 30th year that cows will be calved in the herd. Numbers have grown since the initial collection of four cows. Today every animal in the herd is descended from ten heifers that would have calved in the 1989 to 2000 period. The last female purchased was in 1999 and dad made a decision to breed from what we had from then on. About 20% of the current herd is descended from two of the first heifers that calved. They have thrived well within our system where no animal gets preferential treatment. The breeding policy here is a very straightforward survival of the fittest.

On a personal note, this is also my 30th year of cattle ownership. Following my first communion I sunk a significant proportion of funds raised on that occasion into buying a calf. I got an early start in livestock ownership.

For 2019 I’d like to see sense prevail in the UK regarding Brexit but currency fluctuations would have a more instant effect on day-to-day prices received here.

The fact the three largest Ir

sh beef processors, (ABP, Dawn meats and Kepak) all have a significant element of their businesses located in the UK may be of benefit.

After a collapse in beef price towards the end of last year I’d obviously like to see a rise. That matter is out of my hands though and it’s all down to numbers.

According to the Bord Bia online database, which stretches back 24 years, the next highest throughput recorded was 1,985,019 head in 1999.

The main factor contributing to higher throughput in 2018 is continued expansion in the national dairy herd, while lower live exports have to a lesser extent also had an effect. The dairy herd, at approximately 1.4m head, is approaching its highest level since the mid-1980s.

Live exports have increased by about 50,000 head to date in 2018, with most of this made up of an increase in calf exports.

Calf exports in these two years were recorded at 72,708 and 101,567 head respectively, with farmer purchasing activity putting a strong floor under the market and higher prices limiting the scope for exporters to operate and generate a return.

This in turn increased the availability of cattle coming fit for slaughter in 2018 while higher volumes of concentrates fed during the drought is also said to have contributed to bringing forward slaughter dates.

Two of the main contributing factors for this figure were a collapse in live exports to third countries and a period of colossal growth in the country’s suckler herd. This herd growth was due to a subsidy being paid on suckler cows at the time.

For the coming year, I’d like to see the greater agricultural industry take an interest in welfare. Farmer welfare. It’s badly needed.

In a physical sense, the heads and hearts of farmers had an extremely testing time in 2018. The effects of the year will linger in many yards for some time to come. A farmer said to me recently that while the Health and Safety Authority (HSA) places an emphasis on the safety element of its title, maybe it needs to do more work on health too. This does not just apply to the HSA. It is appropriate to all agribusinesses dealing with farmers.

A recently published survey between Teagasc, UCD and WIT revealed that farmers are five times more likely to die due to cardiovascular disease than other workers. It showed that farmers need to focus more on their health and physical activity.

While farming would traditionally be regarded as one of the most physical occupations, tractors, ATVs and off-road SUVs have taken some of the physical work away.

As a result, some farmers are not getting as much exercise as they once would have.

The results, published by Teagasc in its TResearch magazine, showed that the farmers walked from 8,047 steps per day right up to 19,768 steps per day. The average was 14,163 steps.

The general recommendation for health is 10,000 steps.

That was sobering reading and I’m as guilty as most for my fitness not being up to scratch.

It was different when I was younger. Back then I was playing, I had a relatively good level of physical fitness. While my skill levels were nowhere near where I wanted them to be, I enjoyed running and had a decent set of lungs. Those days seem a world away now. At times if I go for a too strenuous a walk after a long spell sitting down or driving I find my self out of breath a lot faster than I should be. I’ve noticed it a bit more this winter, as there are cows outdoors. It’s not a simple case of walking to the shed, pushing in silage and checking water. There’s a longer walk to where the cows are grazing forage rape. It should do my fitness a bit of good at least.

In recent years I noticed February to April would be my peak weight loss months. It was simply because there was more physical work to be done. Bedding down calving areas, piking silage and cleaning out the calving boxes using the old school brush and pike method does wonders for shedding the pounds.

Mon Jan 14 , 2019
Having read the title of this piece, I can say with some confidence that the first word ‘Swastika’ brought immediately to your mind’s eye, the stereotypical swastika that Hitler used for his Nazi Party. The swastika that represented hate, discrimination and evokes revulsion today in the 21st century. The swastika […] 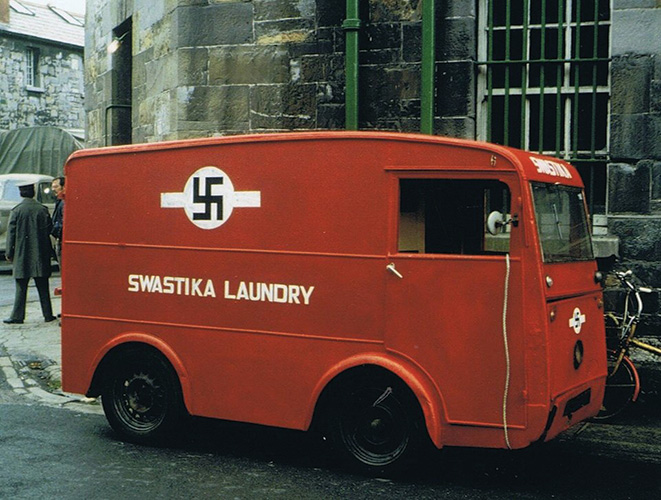