Yorkshire native Laura Cable (26) manages a 130-cow farm just outside Clonakilty. Although she grew up on a beef and sheep farm, Laura’s heart is now in dairy. She talks to Mary O’Brien about how a young woman ends up managing a dairy farm single-handedly in West Cork.

Laura manages the 49-hectare dairy farm for Jerry and Grainne Duggan. “I absolutely love it,” she says enthusiastically. “I work here completely on my own except in the Spring. Although I have all the responsibility and make the calls on the farm, Jerry and Grainne are always available if I need advice or back-up.”

It wasn’t the cows that initially called Laura to West Cork but a man. After completing the final year of her Agricultural and Livestock Science degree at University of Nottingham, Laura travelled on a scholarship to New Zealand for 18 months. It was here she met her boyfriend, Dunmanway native John Forbes, who was working on the same farm. “John was on placement in New Zealand from his Dairy Business Degree in UCD and when he came home to finish his degree, after a brief stint in Yorkshire first, I decided to try my hand at farming in Ireland,” says Laura.

It was in New Zealand however that Laura decided dairy farming was the career for her. “I was hooked straight away.”

I’ve always been mad about animals,” she continues. “When I was younger I wanted to be a vet but, as I got older, I realised I would never get the necessary grades. Until I went to New Zealand I thought I’d go into beef production.” Laura comes from two generations of butchers. “Our farm in Yorkshire supplies our butcher shops, where I’ve worked since I was 14. I’ve always been quite happy to kill my own food and eat it.

“There were 1500 cows on the farm in New Zealand so it was a very different experience to what I’m doing now but I gained a lot of experience over there in calving and calf rearing.”

Laura started managing the farm in West Cork in September 2017. “John was managing this farm but had to go back to college to finish his degree. So when he went back to Dublin in September, I filled his position,” she explains.

Laura’s responsibilities include milking cows twice daily; measuring and managing grass and spreading fertiliser and in the winter; she is also tasked with feeding silage and scraping and liming cubicles.

She’s up at 7am every morning, feeding the calves, checking the cubicles and the cows and in between some maintenance, grabbing some breakfast.

“It took me a while to get my head around the grass measuring. You really have to understand why you’re doing it,” she says. “After a while it becomes addictive and you want to know what’s going on and how well your cows are doing as a result.”

Laura has put her own touch on the farm. “We used to calve in the big shed,” she says “but it didn’t feel safe; with the high walls and gate there was nowhere to retreat to if something went wrong.” Laura changed the layout and moved the calving pen for safety.

She also managed to exceed productivity (extra solids per cow) on the farm and breeding and calving are now more efficient. “I’m proud of my achievements and am seeing the fruits of my labour now,” says Laura.

“I’m a big planner. I do a daily to-do list and once everything is ticked off, my day is done…unless something happens that throws it all out!”

Although the work is physically challenging, if she can’t find a tool or piece of machinery to do the job, Laura has no problem asking for help.

“I’d encourage any woman to get into farming,” she says. “You do have to be tough but if you’re up for a challenge it’s definitely worth it.

“I have the dairy bug now. I love my cows,” says Laura. “I like to roll out of bed and milk them every morning.”

Laura found the isolation very difficult the first six months she was here, when John was at college in Dublin during the week. “I felt very lonely, as I didn’t have any friends of my own,” she explains.

That changed when she joined Macra na Feirme last March. “I’ve become very involved and have made fantastic friends through the organisation,” she says.

She also notes the friendliness of people in West Cork. “Everyone waves to you…and I’m really lucky to have good neighbours.

“The end of last year, I was crossing the cows over and the rain was pouring down. I was drowned wet and a neighbour from over the road came over to me with a packet of biscuits. He told me that before doing anything else I was to have them with a cup of tea when I got back. I like that…the thought that someone is always looking out for you.”

Laura is also a member of the Darrara Discussion Group and a Women’s Farming Group. “The more discussion groups or farm talks you go to, the more confidence you gain,” she says.

She stresses that it’s also important to take time off from the farm. She has every other weekend off. “With the labour and technology available in farming nowadays there is no need to work all hours,” she says.

Laura’s dad is her inspiration. “He juggled two, sometimes three jobs, keeping the farm and the butcher shops running. I learnt from a young age that jobs had to be done. We used to collect the eggs and water the geese after school every day. I enjoyed having that responsibility and I think it’s done me a lot of good now.”

Not shy of hard work, Laura will finish calving here and go home to Yorkshire for a week to help her parents with lambing.

Laura and John’s long-term goal is to own their own herd of cows. “We’ll probably start with share milking, which means we’ll own a portion of the cows. As the profit comes in, we can buy more cows.

“People in Ireland want you to succeed and will help you get on the ladder. That means a lot. Ireland really feels like home now.”

Peeling back the layers 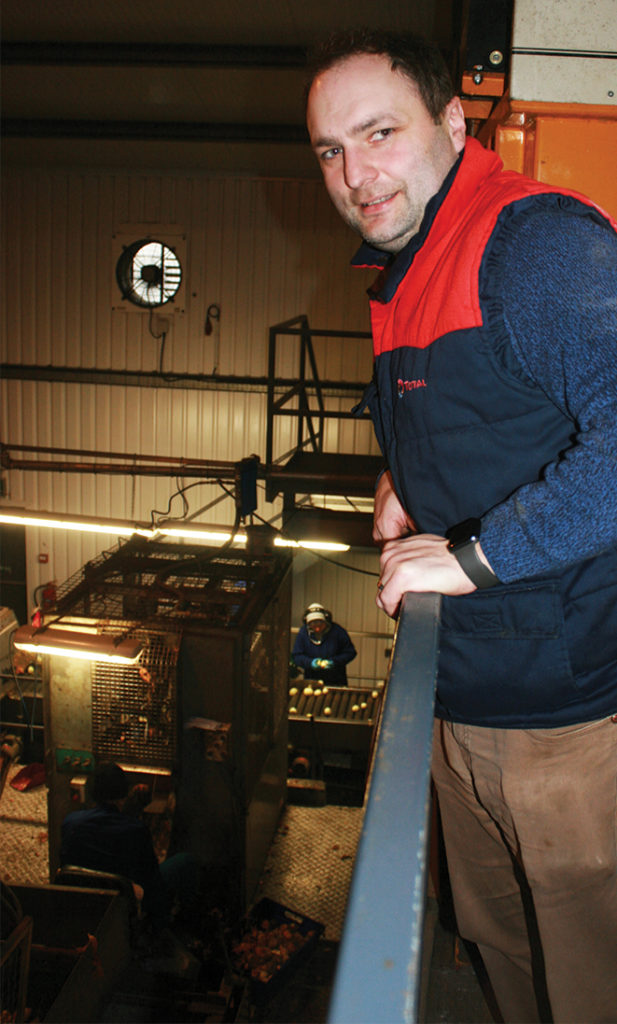