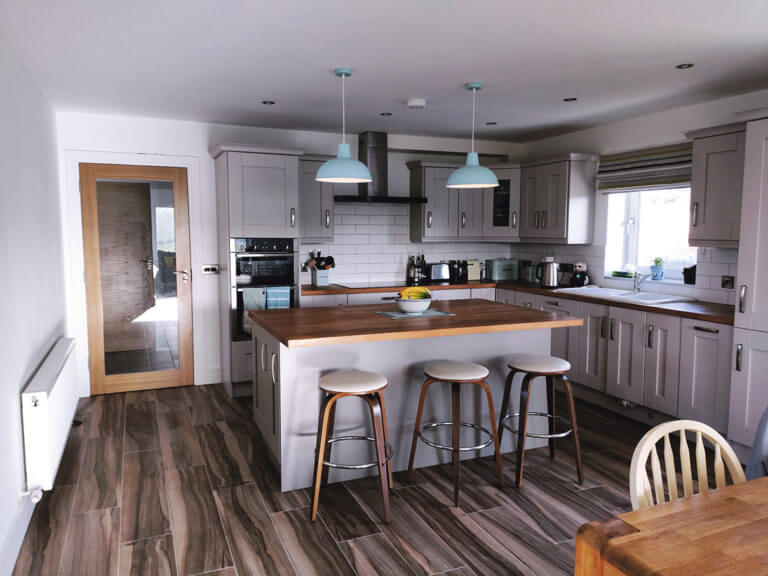 Local couple Jason Fleming and Síle Burns talk to West Cork People about building their family home on a site on Jason’s family farm looking out over the stunning Dunworley Bay in Butlerstown.

Síle works as a physiotherapist with the HSE in Skibbereen and Rosscarbery and Jason works as a marketing operations manager with Global Shares in Clonakilty. Both have a huge interest in GAA and played for their local team Barryroe. Married in 2017, having rented for years in Clonakilty and Courtmacsherry, building their own home was the dream.  Where did they start?

“It’s a beautiful site with a view of Dunworley bay in the distance. The field itself had a slope on it so we had to dig into the field to flatten the site. That went well as there was no rock to dig out or break,” explains Jason.

They started their planning process in January 2015 with a pre-planning meeting where they were able to get agreement on the exact site to use. Over the next 18 months, they went through three submissions before finally getting planning permission.

“Third time was a charm!” says Jason. “You do get your hopes up each time. It’s a challenging process. It helped that we were flexible in our expectations. We could have gone with a bungalow if needed. We were confident that we could shape any house into the home we wanted.”

With permission secured, the builders started work in October 2016. Having spent time over three planning submissions, the design of the final house required few changes and the building went smoothly and on time. Twelve months later in October 2017, Síle and Jason moved into their new home.

“It is a two-storey, three-bedroom house,” says Jason. “It’s more or less finished inside. We did take the decision to focus on completing work inside rather than trying to finish rooms while living in the house. This meant we neglected the outside of the house! But we have years to finish all that.”

From the start, Síle and Jason employed professionals, and this was one of the reasons why they think their build went well.

“We hired an engineer, Ray O’Leary, to help us through the planning process. Once we were ready to send out tenders, we got a Quantity Surveyor to look through the plans and cost them for us. This saved us any Dermot Bannon-like surprises!”

Local builders, Lislevane Construction, won the contract and built the house to a builder’s finish. Síle and Jason then managed the project to completion with the help of family and friends.

“We did as much of the finishing work ourselves as we could – with the help of family we painted the whole interior of the house over a bank holiday weekend.

“We also laid all the laminate wood flooring in bedrooms and the living room ourselves. My brother is a qualified carpenter, which helped us greatly,” says Jason.

Knowing what you want from your house is key to design. Many people forget that a house is built for how you want to use it. Síle and Jason were very focused on this part of it.

“We both wanted a large open plan kitchen/sunroom/living area that would be the focal point of the house. That connects to the living room, which can be part of the bigger space or closed off with a sliding door, “ explains Síle. “We also wanted as much sunlight as possible, so the house was always planned to face south. The only non-negotiable part of the design was my walk-in wardrobe!”

Much research went into their heating system and they went for a mix of an oil boiler with solar panels. The option of an air to water heat pump was not feasible due to their proximity to the sea and the damaging effects of salt in the air.

“The solar panels are extremely efficient at heating our water in the house,” Jason says about the heating systems. “We can use this exclusively for six to seven months of the year.

“We were also quite particular on the type of stove that we wanted – a wood burning modern style with an exposed flue rather than the traditional style with mantelpiece.”

They also thought carefully about the use of space. Instead of traditional stair spindles, they turned this space into a bookcase. To add a traditional touch to their kitchen, they sourced a Butler ceramic style sink from a salvage yard in Blarney. It’s worth looking around for key design elements that can change the feel of a new house for the better.

In talking about the main challenges, the most important was always to get the budget right. During the build, it was difficult to organise with work, but they managed to visit the site as much as possible during construction and kept changes to a minimum while maintaining their timelines.

Building on your own site raises issues with services and, with no possibility of a mains connection, they used the well-known borer, Martin Harte, to drill their well. With the local water being quite hard, they had to also install a special filtration system. An unexpected expense but one that many rural new builds incur.

With everything in place, the last stage is always down to personal taste and practicality. Síle talks about their design ideas.

“We wanted a traditional home but with a modern twist. It’s good idea to look online at sites like Pinterest for inspiration. Our shaker style kitchen is grey with oak counter tops. We did want wooden floors but were advised to use tiles instead. We found good ones with a wooden look and they hide the little bits of dirt really well! Jason’s brother-in-law, Damien Whelton, fitted the kitchen and counters. We love how well that has turned out.”

The pay-off for such a long project is living in a home that your own ideas have created. Síle loves her sunroom and thinks there is nowhere nicer to sit with a cup of coffee, a good book, and the Atlantic view in the distance. For Jason, it is being bunkered down in the living room, the stove blazing, and the winter cold kept well outside.

“Our builders, Lislevane Construction, were great,” says Jason. “They have a great team of tradespeople on hand to finish everything to a standard that we couldn’t have been happier with. J&T Tiles in Clonakilty supplied all the flooring and sanitary ware. They are excellent. And Jason’s brother-in-law, Damien Whelton, was superb. We had the best people working for us and helping us along the way.”

For others starting out on this process, Jason and Síle shared the most important elements in planning, construction and finishing.

“Do attend a pre-planning meeting before you think of any design for your house. Make sure you have a Quantity Surveyor to cost everything. Visit as many houses as possible and don’t be shy about measuring rooms or windows to see how a good home works. Ask for advice. Anyone who has done this knows a lot more at the end than in the beginning. Pick a builder you can trust. Look at their other projects and talk to their clients.”

Does it feel like your home? “Very much. We love it. And our first son Oisín arrived in September 2019. So, it’s a real family home now.”

Castletownbere RNLI lifeboat crew to be honoured with Gallantry award

Tue Feb 11 , 2020
Castletownbere RNLI lifeboat crew are to be honoured by the charity for a dramatic rescue of a fishing crew that took place in challenging conditions and resulted in the lives of six fishermen being saved. Coxswain Dean Hegarty is to be awarded a Bronze Medal for Gallantry by the Institution […] 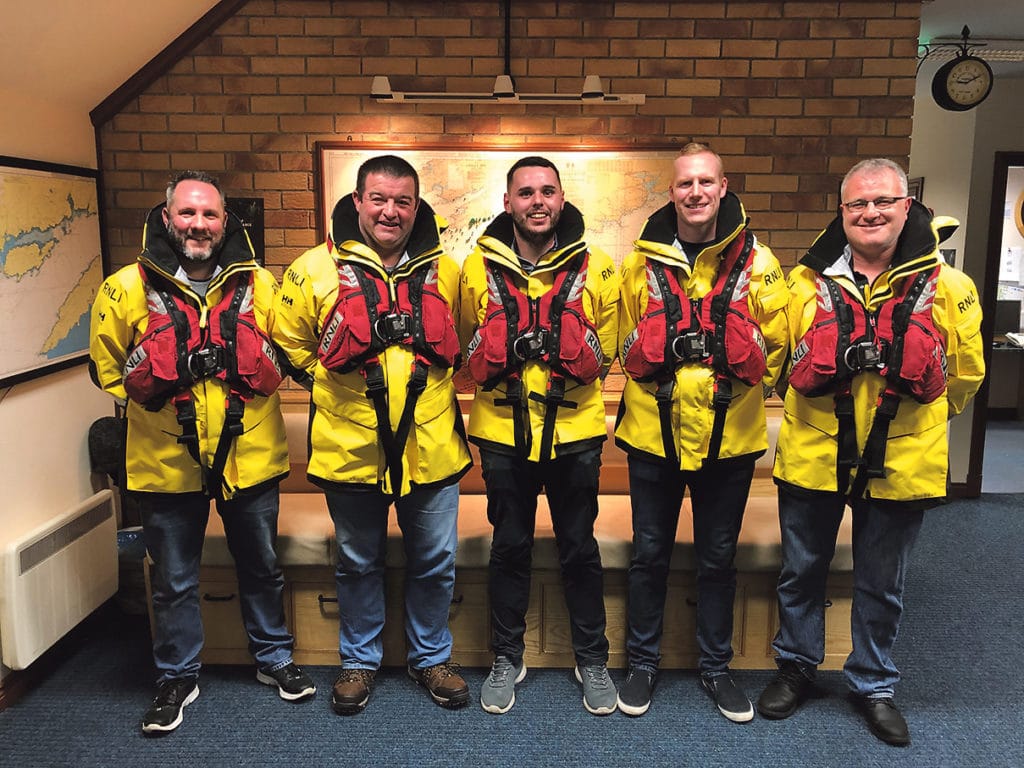