Photo : The alpha female of the Canyon Pack in Yellowstone was quite famous and was known as ‘The white lady’. She was photographed by Dan in 2013 but was sadly illegally shot and killed within the park two years ago.

Green Party leader Eamon Ryan’s recent suggestion for wolves to be reintroduced in Ireland almost 250 years after the species became extinct has prompted a very interesting conversation about the part that wolves play in a functional ecosystem.

The suggestion to reintroduce wolves into Ireland by the Green Party is part of a proposed forestry policy, which calls for a move away from short-rotation coniferous plantation to more diverse woodlands. Wolves help to limit the population of deer and other animals who thin forests.

There is also the argument in favour of reintroduction that wolves would provide a boost to local economies in the form of eco-tourism. The reintroduction of wolves to Yellowstone in the US has attracted 150,000 new visitors each year, adding 35 million dollars to the local economy annually.

Although human intolerance and fear are likely to factor in the discussion (from an early age this fear has been fed with stories of the big bad wolf), West Cork wildlife photographer Dan Lettice believes that the biggest hurdle post reintroduction in Ireland, outside of mitigating wolf/human conflict, would be maintaining genetic diversity within the reintroduced population. Dan talks to West Cork People.

“Continuing supplementation of what is likely to be a small number of reintroduced wolves would be likely needed. This is not an issue in nearly all other European countries, as a natural influx of new genetic material through movement of animals is always very likely. Our uniqueness in this aspect as an island (obviously the UK is the same) makes the process of reintroduction and future conservation of the reintroduced animals a more difficult undertaking.

“Difficulties with genetic diversity are well researched in the Scandinavian (Norway and Sweden) wolf population and on Isle Royale in Michigan. This aspect of a wolf reintroduction in Ireland is rarely discussed but is a very important factor, in my opinion. This should, and I’m sure would, form a big part of the assessment, as to if a reintroduction would be viable or not.”

The wolf is one of Ireland’s native mammals species, which includes brown bear and wild boar. The last wolf in Ireland is said to have been killed in 1786 near Mount Leinster in Carlow. “The demise was probably down to a combination of lack of suitable habitat due to deforestation, expansion of land use or farming and concerted efforts to exterminate… all essentially a result of the actions of humans!” says Dan.

The wolf appears in Irish myth and folklore regularly and occurs in placenames and personal names. If we look at West Cork placenames, it’s obvious the wolf once roamed the landscape here…with Wolf Hill in Durrus, Breaghna near Enniskeane meaning ‘the place of the wolves’ and Cnoc na gConallach, Dunmanway meaning ‘hill of the wolves’.

“Wolves invoke a whole host of responses in people that very few other animals do, be they good or bad,” says Dan. For many the wolf epitomes true wilderness: An apex predator ranging over territories in areas with little or no human activity. For the most part this is where wolves do best, on their own with plenty of room and away from their only predator, humans. However Dan explains that wolves are extremely versatile and can and now do live in areas with high human populations densities. “They live and thrive near humans, including in parts of Europe. They are the key part in a fully functional ecosystem cascading right from the top predator position they occupy down to the smallest animals, balancing the ecosystem from the top down. For example, any future native trees planted in Ireland would have a better chance of progressing to maturity if wolves, in areas of high deer density, kept deer levels balanced.

“There are also ways of protecting livestock and if a farmer does lose an animal to a wolf, he could be compensated for that loss.

“There will be conflict but there is no reason why we can’t move towards the reintroduction of wolves. It can happen but the question is ‘Are we open to reintroducing an animal that’s native to Ireland but is the subject of so much division. Education is the key; convincing people that wolves are not the threat to people and their livelihoods that they perceive them to be.’

Wolves, who are by nature very shy, were once the most widespread mammals on the planet, but as human populations grew, wolves suffered. They were exterminated from most of their range starting in Europe and then on the American continent, as European settlers arrived. “As humans slaughtered wolves they reserved the most horrible of treatment for them. Wolves were shot, trapped, hunted with dogs, poisoned on a mass scale and even buried alive,” explains Dan. “It’s astonishing that to this day all the same barbaric techniques are still used to hunt (or harvest as they like to say in some parts) wolves and in a lot of cases with the backing of local government wildlife agencies.”

Eventually through legislation in the US and Europe, wolves were afforded protection. They were successfully reintroduced in Yellowstone National Park and parts of Idaho in 1995 and along with populations in other Northern US states like Minnesota have established themselves in relatively healthy numbers. Wolves have also now been reported in all continental European countries. They spread from far eastern Europe to repopulate Poland, Germany and onwards and small surviving populations in Italy and Spain expanded.

Most European countries are bound by strict wildlife protection laws but can allow hunting if populations have reached viable levels and pressure is increasing on the EU to allow more extensive population control.

“All the horrors we have meted out on wolves is even more astonishing when you consider the two species relationship,” says Dan. “Millions and possibly billions of humans around the world share our homes with, sleep with and spend significant money on our own wolves – our dogs! Dogs are essentially, domesticated, selectively bred wolves and their genetic link and evolution from wolves is now undisputed.

“Wolves are similar to ourselves in their family structure: A pack, led by an alpha pair, with a very strong social structure. Cooperative hunting between the whole pack and shared babysitting duties amongst all the adults.

“So one might say that wolves are ‘the’ most important animal humans have ever interacted with and both species evolution and success are closely linked.”

Dan quotes Canadian writer and environmentalist Farley Mowat; ‘We have doomed the wolf not for what it is, but for what we deliberately and mistakenly perceive it to be – the mythologised epitome of a savage ruthless killer – which is, in reality, no more than a reflected image of ourself.’

Tue Nov 5 , 2019
Photo : Alan Gardner and Adam Harris visit The Sensory Gardens with The Autism Committee and The Tidy Towns Committee to celebrate the one-year anniversary as Ireland’s first Autism Friendly Town. Photo by Dermot Sullivan. Over the past year, Clonakilty’s journey to becoming Autism-Friendly – through the partnership with AsIAm […] 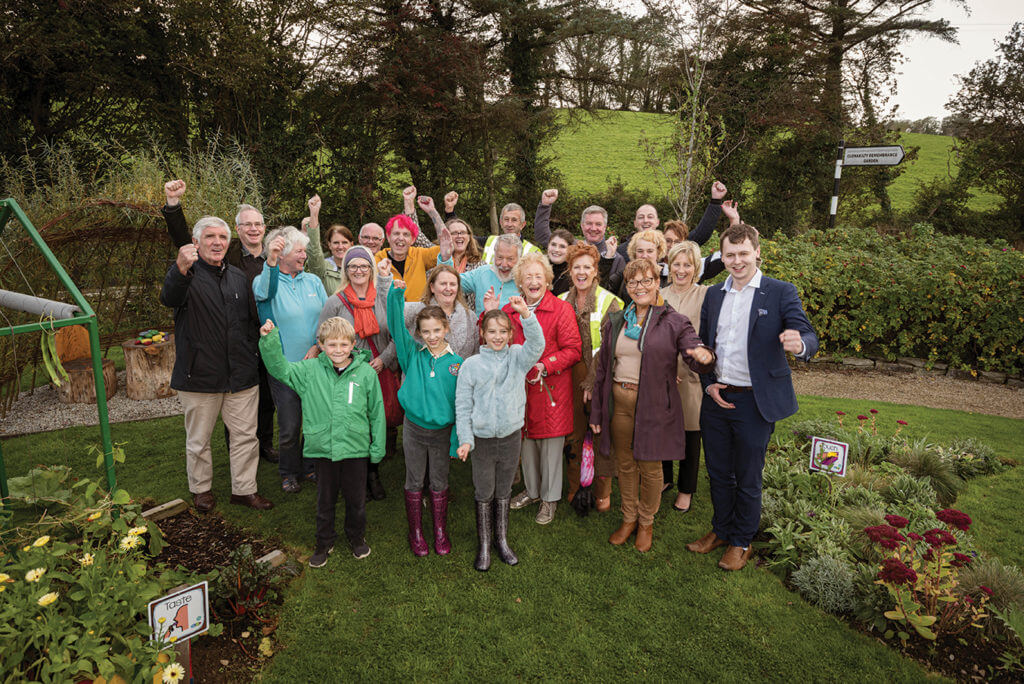