$2,000,000,000! That is the latest fine that Monsanto has been ordered to pay to a couple that got cancer after using its weed killer. A jury ruled against Monsanto, now owned by the German company Bayer. marking the third and the largest verdict against the company over Roundup. The jury in California said that Bayer, was liable for the non-Hodgkin’s lymphoma (NHL) cancer of Alva and Alberta Pilliod, and ordered the company to pay $1bn in damages to each of them, and more than $55m total in compensatory damages.

The latest verdict is the largest by far and will increase pressure on Bayer, which has seen its share price drop in the wake of the verdicts and is now facing similar lawsuits from thousands of cancer patients, survivors and families who lost loved ones to NHL.

The juries have repeatedly found that Roundup was defectively designed, that the company failed to warn consumers about the cancer risks, and that Monsanto has acted negligently. The cases have uncovered internal documents that  lawyers say reveal the ways in which the company has ‘bullied’ scientists over the years and helped ‘ghost-write’ research defending the safety of glyphosate, the main ingredient in Roundup.

With over 13,000 cases filed against Monsanto, Bayer’s purchase of the company last year for $63 billion is looking like a bad investment and their shares continue to fall. It is not just in America that cases are been won; in April of this year, a French appeals court said US chemicals giant Monsanto was guilty of poisoning a farmer who said he suffered neurological damage after accidentally inhaling fumes from a weedkiller made by the company. It is only a question of time until we start to see settlements here in Ireland.

With all the evidence and money involved, I am still amazed at how many government organisations, Co. Councils, farmers, private land owners, retailers and many more continue to use and promote this known carcinogen. Even if they are not concerned with their own health or that of  others, are they not worried that they may be liable in the future for using, selling and promoting a chemical that has been proven by the World Health Organisation’s International Agency for Research on Cancer, as ‘probably carcinogenic to humans’?

Data from the Department of Agriculture reveals that 3,135 tonnes of pesticides were used in Ireland in 2016. That’s a lot of chemicals to use in a small area of land, and with a growing awareness of just how important it is to have a diverse ecosystem and healthy population of pollinators (and humans), this seems like environmental murder to me. How many of us have watched in horror as a man in full protective clothing and breathing mask sprays around parks and playgrounds, as children play mere feet away.

There is a growing awareness of the dangers and some Co. Councils such as Dublin City Council’s Parks Department are making an effort and are testing alternatives to the use of glyphosate as a weedkiller on streets and in parks of Dublin.

Three alternatives will be trialled this year in selected areas: Mechanical weed control using spades and shovels; a hot foam with no chemicals; and a method known as ‘New way’ spray, which uses vinegar.

Here in Skibbereen, a huge amount of work has been done by Tidy Towns to edge kerbs by hand this year and not spray. Thankfully there has been no spraying yet in our  playgrounds (as in previous years) or public parks. There is also a great interest in pollinator-friendly plants to be planted around many towns throughout Ireland and our plant suppliers tell me the demand has never been higher for bee-friendly plants.

Many gardeners and farmers are now choosing to leave weeds (a weed is a plant judged to be growing in the wrong place) alone, as they are rethinking the way we garden and farm.

Desiccation may be the most widespread farming practice you’ve never heard of. Farmers desiccate by applying herbicide to their crops; this kills all the plants at the same time, making them uniformly dry and easier to cut. In essence, desiccation speeds up plant aging. Before desiccation, crops would have to dry out naturally at the end of the season. Today, there are examples of desiccation being applied to every type of conventional crop worldwide. Glyphosate is increasingly used as, or with, desiccants. It’s sold under the trade name RoundUp, and is the most commonly used herbicide in the world, as well as the most commonly used desiccant. In 1974, global use of glyphosate was 3,200 (nearly the same figure used by Ireland in 2016) tons per year. It is expected to reach one million tons per year by 2020.

Desiccants kill more than plants. Herbicides like glyphosate also kill bacteria. Glyphosate is in fact patented as an antibiotic, and when broken down, the word antibiotic actually means ‘anti-life’ or ‘life-killing’. Our gut bacteria are sensitive to antibiotics, which is why we should avoid eating herbicides. When our microbes are healthy, our immune system is stable. But when microbes are disturbed, diseases like obesity, Alzheimer’s, or celiac disease can result.

There is also growing evidence of unhealthy soil with few or no microbes present linked to prolonged applications of glyphosate. This leads to plants been unable to absorb nutrients, easily affected by drought and disease, soil erosion and many more issues making huge areas of previously productive land unable to grow plants.

An opinion poll of 1000 Irish adults found that 64 per cent who know about the controversial chemical are concerned that it may be present in their body through the consumption of food and drink, and 68 per cent favour outlawing its spraying on food crops here. However, the survey also found that almost two out of three adults, 63 per cent, have never heard of glyphosate despite its links to cancer and the row among EU states over whether to keep renewing its licence for use.

Seventeen countries worldwide have now banned or restricted the use of this carcinogenic herbicide.

Belgium: In October 2018 the ban on the sale of broad-spectrum herbicides (including glyphosate) to non-professional users entered in to force across Belgium.

Czech Republic: In 2018 the Czech Republic put strict restrictions on the use of glyphosate and banned pre-harvest spraying; “These substances (glyphosate-based herbicides) will only be employed in cases when no other efficient method can be used,” Agriculture Minister Miroslav Toman said.

Denmark: In July 2018, the Danish government implemented new rules banning the use of glyphosate on all post-emergent crops to avoid residues on foods.

France: In 2017 France banned the use of glyphosate and all other pesticides in public green spaces. In November 2018 President Macron said he would take all measures necessary to ensure that glyphosate-based herbicides are banned in France as soon as an alternative is available and at the latest within three years. However, he has since stated that this deadline may only be 80 per cent met.

Italy: In August 2016 Italy’s Ministry of Health banned the use of glyphosate in public areas and also as a pre-harvest spray.

The Netherlands: From the end of 2015 the sale of glyphosate-based herbicides has been banned to all non-business entities.

Will Ireland be the next on this growing list of progressive countries? That would be wonderful but not very likely. However, you do have the choice to decide what happens on your own land, and what chemicals you expose yourself, your family and your neighbours to. What will our children think of  today’s use of weed killers in a few decades?

So how to cut your
glyphosate exposure?

1) Stop buying Roundup. Ask your neighbours if they’d be willing to let go of glyphosate as well. If you still want to remove weeds, there are effective natural alternatives.

3) Go to the farmer’s market. Pick-up produce that’s been raised without chemical pesticides like glyphosate.

6) Grow your own. Starting your own vegetable garden will ensure that your food is grown without glyphosate – just make sure the soil you use in your garden is from a clean, healthy, pesticide free source!

Fri Jul 5 , 2019
Cork County Council has taken delivery of two new 8,500 litre water tankers to complement the existing Council Fire Services fleet. The new water tankers, which will be stationed in Bandon and Bantry, will improve fire fighting services in responding to fires in areas which do not have an existing […] 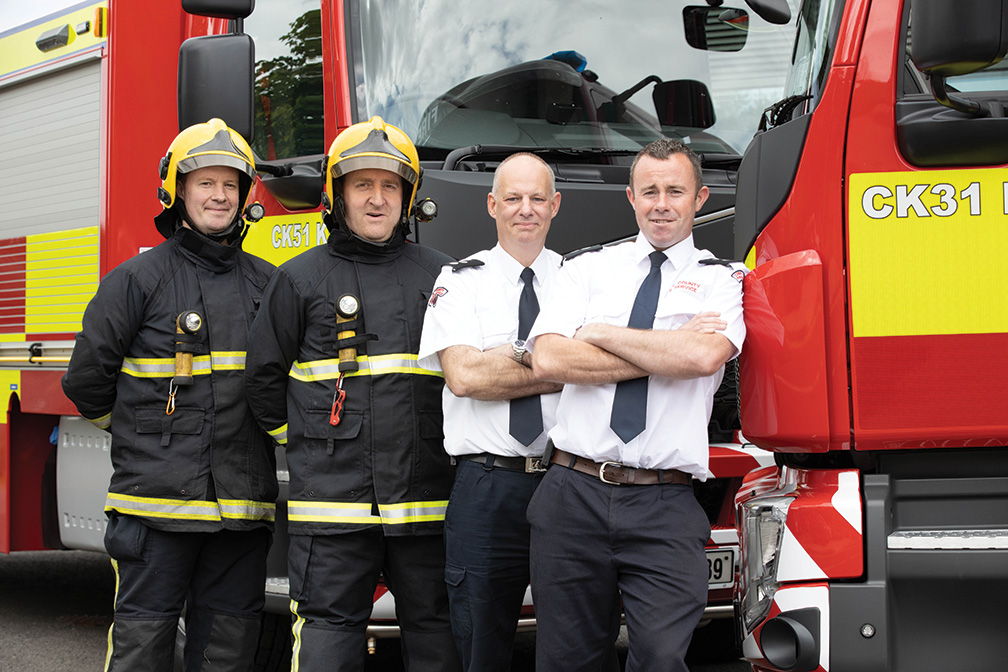