A lifelong activist and campaigner, Jennifer Sleeman is well known in West Cork, most notably for spearheading the campaign that saw Clonakilty becoming Ireland’s first Fairtrade town. Recently turned 90, Jennifer is close to all her offspring, in particular her firstborn Fr Simon, 68, a monk of the Benedictine order in Glenstal Abbey. On a recent visit to Clonakilty, Fr Simon Sleeman talks to Mary O’Brien about monastic life, dealing with depression and Christmas at the Abbey.

“People today are desperate for quiet,” says Fr Simon “so they come here.”

As well as being home to a monastic community and boarding school for boys, Glenstal Abbey has a guesthouse and a number of ‘God
Pods’ (hermitages), which offer an escape for those seeking solitude.

St Benedict, from Italy, is known as the father of Western monasticism. He lived in the fifth century when Roman culture was collapsing. “I often think we’re not too far off it ourselves,” reflects Fr Simon. Disliking the decadence of Rome, St Benedict went to live on his own in a cave for three years before attracting a number of followers, which led to him establishing a monastic community and writing a code of monastic laws and observances known as the Rule of Saint Benedict.

“The first word in the Rule of St Benedict,” continues Fr Simon is ‘Listen’, something my mother and I both agree is a skill everyone should be trained in.”

In the words of St Benedict ‘Listen and attend with the ear of your heart.’

Last year, after being unexpectedly asked to take on the role of headmaster again, Fr Simon experienced the noise of modern day life from which so many are trying to escape. “I was totally unprepared for it,” he says. “I finished my term as headmaster in 1998, when there was no Internet or mobile phones. This time it was a completely different atmosphere with so much more pressure and demands attached to the role. By Christmas last year, I was suffering deep anxiety and depression.”

By the spring of 2018, Fr Simon was a patient in the Saint John of God Hospital, an independent acute psychiatric teaching hospital in Co Dublin.

However painful the experience, the monk says he wouldn’t trade it for anything. “People talk about the ‘black dog of depression’. I realised that, for me, it was a guide dog…it stopped me and made me look at my life and reassess, slow down. I can say that now looking back, but a year ago I was in a dark hole. There is no pain like the pain of depression and what haunts me is that there are people out there who don’t have access to the kind of help that I was lucky enough to have.

“People are not finding what they need to nourish their souls, not from consumerism or from the Catholic Church!

“The Catholic Church has tended to get sidetracked by issues of morality and sexuality.

“There are two things that St Benedict taught must be treated with the most severe discipline. It’s not drink or sex or rock and roll. It’s ‘murmuring’ and ‘possessions’. ‘Murmuring’ can be described as bitching or backbiting and is what corrodes a community. ‘Possessions’ impede our growth.

“Our most important vows as monks are ‘stability’, which refers to being rooted and not running or moving away; ‘conversion of life’, which is commitment to change. Cardinal Newman said ‘to live is to change, and to change often is to become more perfect’; and finally, ‘obedience’, which in my view is to listen, to live, and to hear what you have to do.”

There are many misperceptions about monastic life.

“A monastic life isn’t about being miserable,” explains Fr Simon. “The goal is to live in a structure and to a rhythm that allows your heart to enlarge and run with the unspeakable JOY of love. And living in a community of 30-plus, this can be challenging,” he says laughing.

Life at Glenstal Abbey starts with an early rise at 5.45am, followed by some yoga or quiet prayer. Morning Prayer is at 6.30am and afterwards there is time for a walk before breakfast, which takes place in silence until 8.30am. Fr Simon usually spends the rest of the morning reading or writing. “At this particular moment, I’m preparing an Advent retreat,” he shares.

Mass is at 12pm, followed by lunch. There is time in the afternoon for a rest and a walk. Fr Simon is a beekeeper, so depending on the time of year he might attend to his hives.

Vespers, also called Evening Prayer, takes place at 6pm. The prayers are sung in Latin. “It’s beautiful,” says Fr Simon. “One of the extraordinary things about this way of life is that we are still performing Vespers in exactly the same way as St Benedict did in 480.

Supper at 7.15pm is a formal affair where the monks eat and listen to a book read being read, as they eat in silence. After that there’s some recreation time followed by the final prayer at 8.35pm and back to the room at 9pm ready for bed at 9.30 or 10pm. This routine happens more or less every day of the year.

“It’s a privileged existence,” says Fr Simon. “Most people’s lives today are so busy, they’re so distracted, it’s hard to find a life that is designed to make you grow and find fullness of life.”

This year, Advent begins on Sunday, December 1. “It’s an extraordinary season…the beginning of the Church year and also a time of waiting,” explains Fr Simon. “Yet a lot of people barely know Advent exists.

“During Advent you’re preparing for the Birth of Christ, in yourself, not in the crib. It’s rich in symbolism, darkness and light. Our lives are so over- illuminated and we avoid the dark in ourselves and outside!

“The Gregorian chant for Advent is transformative…it lifts me, shifts me up a gear.”

“Christmas in Glenstal,” continues Fr Simon “is quiet and beautiful, with lots of incense and candles.”

Christmas Eve tends to be a late night for the monks, with the congregation invited into the Abbey after midnight mass for tea and biscuits. The monks get to sleep in until 8am on Christmas morning, which is always busy, celebrating mass. “We cook dinner ourselves in the evening, turkey and ham, and are usually wiped out afterwards, so retire to bed early,” says Fr Simon.

Monastic life wasn’t something that Fr Simon always aspired to. He didn’t have a particularly religious upbringing. “A light dosing of Catholicism from his parents,” is how he describes it.

Born in Berlin in 1951, a post-war baby, he spent the first few years of his life travelling with his parents between Germany and South Africa. His father had been in the British Army and, captured at Dunkirk, he spent four years in a POW camp during the war. Fr Simon was about four or five when the family settled in Ireland in 1956 and he has happy memories of the next few years spent on the family farm just outside Mallow in North Cork until he was shipped off to boarding school in Dublin at the age of eight. “It’s one of the very sad moments in my life,” he recalls. “I remember arriving at the school and my father leaving me. I hadn’t worked out at that stage that I’d actually be left there.” He went on to board at Glenstal Abbey.

After 12 years of boarding school, unsure of what path he wanted to take, Fr Simon decided to do voluntary work and ended up in Belize at the age of 18. He came back determined to join the army and travel the world like his father and grandfather and great-grandfather before him. “I certainly didn’t come back from Belize with much religion,” he says “there was as much wine, women and song there as you wanted!”

He signed up but before heading off decided to visit Glenstal to let the monks know how he had gotten on with his voluntary work.

“I remember standing in front of the castle, feeling this energy or heat travelling up through my body. It was like an invitation. I remember saying ‘this is it’. I felt a great sense of opportunity and possibility.”

“This kind of life offers a lot of scope for exploring and self-development,” he explains. I don’t have a wife or children, but I have time for doing things that other people don’t have time for.”

Over the years, Fr Simon has spent time studying, teaching and travelling. He gives a lot of retreats, which is something he very much enjoys. As well as working for many years in the school, he is also very involved in the local Community Council, engaged in projects such as the building of a playground, a walkway in the village and other amenities to benefit the local community.

‘He should first show them in deeds rather than words all that is good and holy.’ Saint Benedict of Nursia,

The Rule of Saint Benedict.

Have yourself a very merry green Christmas

Tue Dec 10 , 2019
This year has seemed to go so fast. I can’t believe we’re already at the end – until I look out the window after 4pm that is! Every day this week I’ve thought it was time to wind up the day, only to find that there are still two more […] 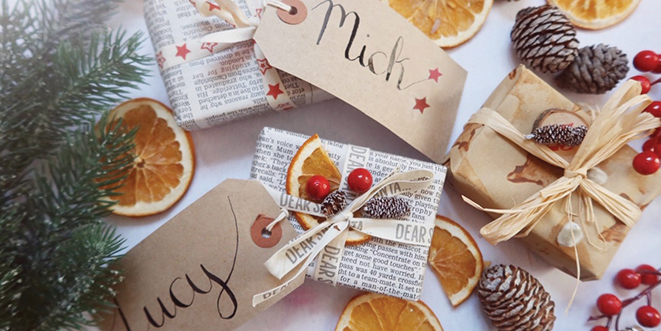