In 2017, Caroline Costello from Cork developed secondary lymphoedema as a result of cancer treatment. Six months ago, Caroline paid for a surgery in the UK called lymphaticovenular anastomosis (LVA), an effective treatment for early lymphoedema, which isn’t available in Ireland.

A long-term chronic condition that causes massive swelling in the body’s tissues, usually the arms or legs, lymphoedema is estimated to affect up to 13.000 people in Ireland. The condition develops when the lymphatic system doesn’t work properly and is a common side effect of cancer and some cancer treatments. If lymph nodes are removed during surgery to treat cancer, then the lymph can build up and cause swelling. Although there is no cure, with early diagnosis lymphoedema can be effectively treated and managed.

Currently if patients don’t pay for their treatment privately, they have an agonising wait on the public healthcare system. There is a 12-month waiting list for lymphoedema services in public hospitals in Cork.

Although the HSE has developed a new model of care for the treatment of lymphoedema and lipoedema in Ireland, this has yet to be delivered. It is due to be rolled out in September 2019 with Laois and Offaly piloting the scheme. According to Minster for Health Simon Harris, the broader implementation of the model of care will be addressed by the HSE in the coming months in the context of the budget process for 2020.

“I was in constant pain,” says Caroline who literally had to knead her legs as you would dough to get the fluid moving under the skin. “It feels like having a boiling kettle on your leg all the time. As the day progressed, it felt like a slow boiling kettle with the pain getting worse as the swelling increased.” Hot weather, sitting down or standing for long periods and driving all caused severe swelling and pain in her leg.

Although she had private health insurance, at the time Manual Lymph Drainage (MLD) –  a very gentle form of advanced massage therapy, aimed at moving the lymph under the skin – wasn’t covered by her health insurance company, so Caroline paid for the treatment herself, as often as she could afford.

“If I had waited for the 12-18 months on the public waiting list, I don’t think I could have coped with the pain. It’s a disgrace that there is such a long wait on the public system across the country for MLD,” she says.

Caroline also looked into alternative treatments and found that water really eased the symptoms of lymphodoema. She visited the hydrotherapy salt water pool at Inchydoney Island Lodge & Spa in Clonakilty and The Radisson Hotel in Little Island, which has a hydrotherapy pool with jets. “Combined with the MLD treatments, these helped a lot,” she says.

Caroline had just turned 50 when she was diagnosed in April 2017 with amelanotic nodular malignant melanoma, the most dangerous and aggressive form of skin cancer. She had a sentinel node biopsy and an excision in May and with the Sentinel node showing a very high mitotic rate, the surgeon recommended the removal of all lymph nodes in the groin area as a precautionary measure.

After a complete groin dissection on June 28, 2017, she woke up with two suction drains in her thigh. “They took one out after five days and left me home with one drain until the lymph fluid had reduced,” she says.

On July 14, Caroline started to feel very ill. Blisters started forming on her thigh where the fluid was flowing out of the drain.

“It was burning my leg. Within an hour I couldn’t move. It was the worst pain I’ve ever felt,” she recalls.

A friend of Caroline’s called an ambulance and she was hospitalised.

Her hospital stay was 23 days in total. “I spent five days stuck in a bed attached to a catheter, as I couldn’t move,” says Caroline, who had developed a severe intolerance to the IV antibiotics that were administered every two hours. “I was hooked up to an IV 24/7 for 21 days. They sent the infectious disease department from CUH to see me, as my temperature had spiked at 41.8C, which makes the body feel cold and tremble and shake uncontrollably. At that stage I thought that was it for me, with alarms buzzing and nurses and doctors running to me at 2am and covering me in cold water and ice.”

Caroline had developed cellulitis, a bacterial skin infection in the deep layers of the skin and a common infection in lymphoedema. “All the fluid builds up in your leg, which gets so big that the skin breaks open into weeping open sores, which can become infected,” she explains.

At this stage, Caroline was told she had lymphodoema.

“Nobody warns you of this complication for lifelong Lymphoedema and that was my main reason for going to the UK for the surgery. I never want to feel pain like that again ever.”

Her consultant also told her that the results from the node dissection had showed that cancer was present. “My lymph nodes hadn’t been removed in vain…I was glad of that at least,” she says.

After months of pain and research, Caroline travelled to the UK for her procedure. ‘It reconnected my lymphatic system with my veins to give me a percentage of a working lymph system in my leg,” she explains.

“I feel so much better now since I had the surgery. I have two normal sized legs now and just have to wear an ankle bandage instead of a bandage from my ankle reaching up to my groin.

Ironically the surgery in the UK, which has reduced Caroline’s risk of reoccurance of cellulitis, would have been cheaper for the insurance company to cover than the hospital stay for cellulitis.

“On page 30 of the HSE’s new model of care for lymphoedema it states that patients with lymphoedema should have access to surgery abroad. This is the surgery that my health insurance company wouldn’t cover,” says Caroline.

“I don’t want to think about what state I’d be in now if I hadn’t had the surgery.”

Tue Aug 6 , 2019
Cork-based production company Wombat Media will be launching an innovative virtual reality documentary set on Cape Clear Island this August Bank Holiday Weekend, as part of the Skibbereen Arts Festival. Wombat Media is a video production studio specialising in factual and narrative film and screen content. Made up of Ciara […] 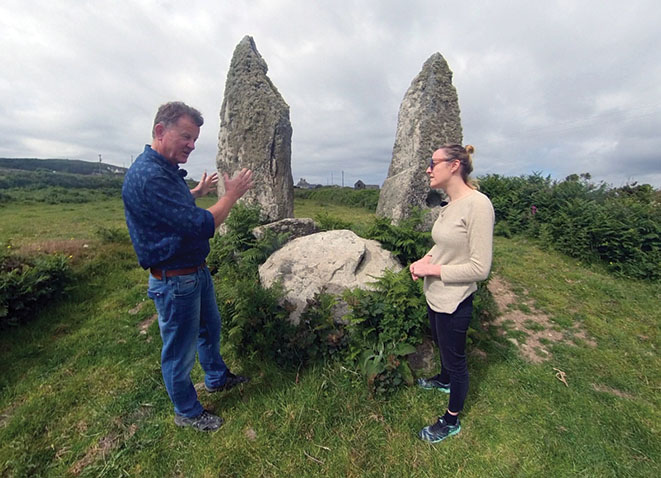