It is a well-known facet of history that as the Second World War was drawing to a close, many high ranking Nazi officers and officials fled from Germany to South America. More specifically Argentina and Chile. The war was being fought on the ground by foot soldiers. They were dictated to by their superiors from high rise offices and plush homes in Berlin. The Nazi’s in charge of German armies on the ground would have been well aware that the Allied Forces were closing in. They would have known that their army was being beaten quite comprehensively from any and all angles and would have had time to plan their escape. The Officers that were dictating from mansions on the hill would have had an easier route out. However, those that were close to the epicentre in Berlin had the use of previously dug tunnels that would remove them from hostilities in relative safety.

These are facts we know. Any and all history books worth their salt will tell you this in detail. However, what is often not spoken about is who escaped and what happened when they arrived in South America. Nazi’s such as Josef Mengele, Paul Scahfer, Walter Rauff, Franz Stangl, Josef Schwammberger and Erich Priebke among others. Why South America you might ask. Unusually, there were many Nazi sympathisers in South America. Particularly in Argentina. Juan Peron was the President of Argentina in 1946 and he had been a member of the Nazi Party for years prior to his inauguration. Convenient. So any high ranking Nazi that managed to get out of Germany in time was given a safe haven in Argentina and a chance to start afresh. Augusto Pinochet the Chilean Dictator was also a friend to the Nazi’s and gave them the same in Chile.

The exact number of Nazi’s that escaped is not known but it is conservatively estimated to be in the tens of thousands. Incredibly there are as many as 50 isolated German colonies in Argentina and Chile. With a total population of roughly 200,000 – 400,000 people. All direct descendants of the highest ranking Nazis. An isolated colony is a part of Argentina that these Nazi’s set up a new life in. What is staggering is that these colonies are often gated, secluded estates with no tie to Argentina. Everything here is German. They only speak German. They wear German clothes, the houses here are built by German craftsmen and architects so they are German in style. The schools are German, the hospitals are German, everything is German. And every single member of the community is a direct descendant of the highest-ranking Nazi’s officials of the Third Reich.

There are as many as 50 of these isolated German colonies in Argentina: None of which speak any Spanish. They only speak German and live in what is essentially a bubble and mix only within their own people. They idolise their close relatives and have SS memorabilia, as well as Nazi flags and emblems. The speak about their relatives with pride and with the utmost reverence. However, they are aware that their grandfathers or close relatives past is controversial and a taboo subject so it is not openly spoken about. This evidence came about through undercover operations by German-speaking journalists with a constructed rouse as to why they were in the colony. The most well-known village is Bariloche in Argentina. Bariloche is a Nazi colony in the heart of Argentina. With a German-speaking population.

Colonia Dignidad is a similar colony in Chile. Again the same principles apply here. Completely sectioned off. A remote, secluded community in the hills of Chile that is exclusively German. Again without any Spanish. Only German is spoken. When the Nazi regime was at its peak one of the aspects of regime was to experiment on the Jewish people. For example, a Nazi doctor would take two Jewish twins, often young twins, and separate them. They would place each twin in a different room. They would then torture one twin to see if the other could feel its sibling’s pain. They would set the child on fire. Stab the child. Cut the child. Burn them would hot irons, shoot the child and eventually kill the child. They would then document whether or not the other living sibling had felt any pain. During this time the living sibling would be unaware as to what was happening next door.

One of the architects of this experiment was a doctor called Josef Mengele. Mengele was known in Germany as ‘The Angel of Death’; he escaped Berlin and fled to Chile. He was helped in by Augusto Pinochet and given a new start. Josef Mengele helped to build Colonia Dignidad and was the founder of the colony’s hospital. He worked here for decades after the war continuing to experiment on Chilean children that were kidnapped, smuggled behind the gates of the colony and brought to him. He operated with full impunity because he was a high-ranking Nazi and friend of Pinochet.

The story of Colonia Dignidad is a long and detailed one but possibly the most startling aspect of it is how it was paid for. The land was bought by the escapee Nazi’s for the sum of $100,000,000. Where did this exorbitant sum of money come from? It was accumulated by Mengele and the other Nazi’s by the smelting of gold wedding rings that were taken from dead Jewish prisoners in Auschwitz and Birkenau concentration camps. Colonia Dignidad is still active today as well as all the other Nazi colonies in Argentina and Chile.

However, if it was only the highest-ranking Nazi officials that escaped, how come the highest-ranking Nazi of all, their leader Adolf Hitler was left behind in Berlin? That simply doesn’t make sense. Surely he would be the most protected. It was the Russian Army that claimed to have found Hitler’s corpse along with that of his wife Eva Braun. Interestingly, recent tests on the body that the Russians claimed was Hitler, has been positively identified as a 35-year-old female’s skull. The Russians don’t have Hitler’s remains. It has transpired that it was somewhat of a propaganda act.

There are no photos of Hitler’s dead body. There is no video. There is no death mask of Hitler. In fact, there is no evidence in any shape or form that Hitler died in Berlin in 1945. Except testimony. Which in itself is unusual. As surely, having defeated the most infamous dictator of all time and having found him to have killed himself in a Bunker due to the Allied Forces unrelenting pressure. Documenting his death would be high on the list of priorities.

There are ever growing theories that Hitler did not die in Berlin on April 20, 1945 but instead escaped with the thousands of other high-ranking officials to South America. Which, if we were to be pragmatic that makes much more sense. There is a huge amount of eye-witness reports of Hitler sightings in Argentina but none that can be confirmed. One thing we do know for sure is that Josef Mengele lived the rest of his life in South America comfortably. He married a Brazilian woman and died of old age on a beach in Brazil. His journal was found in the sand.

Did Hitler escape? That is unknown. But what we can say with certainty is that History, as it is taught, is not as Black and White as it is portrayed. It’s grey.

Tue Aug 6 , 2019
August really is the month in Ireland for home grown Mediterranean vegetables. Tomatoes, aubergines, peppers and courgettes are all sun-loving fruits that are eaten as vegetables. The ‘sun loving’ being the reason they take all summer to ripen. Our courgettes have been taking their time. We’re still hovering around the […] 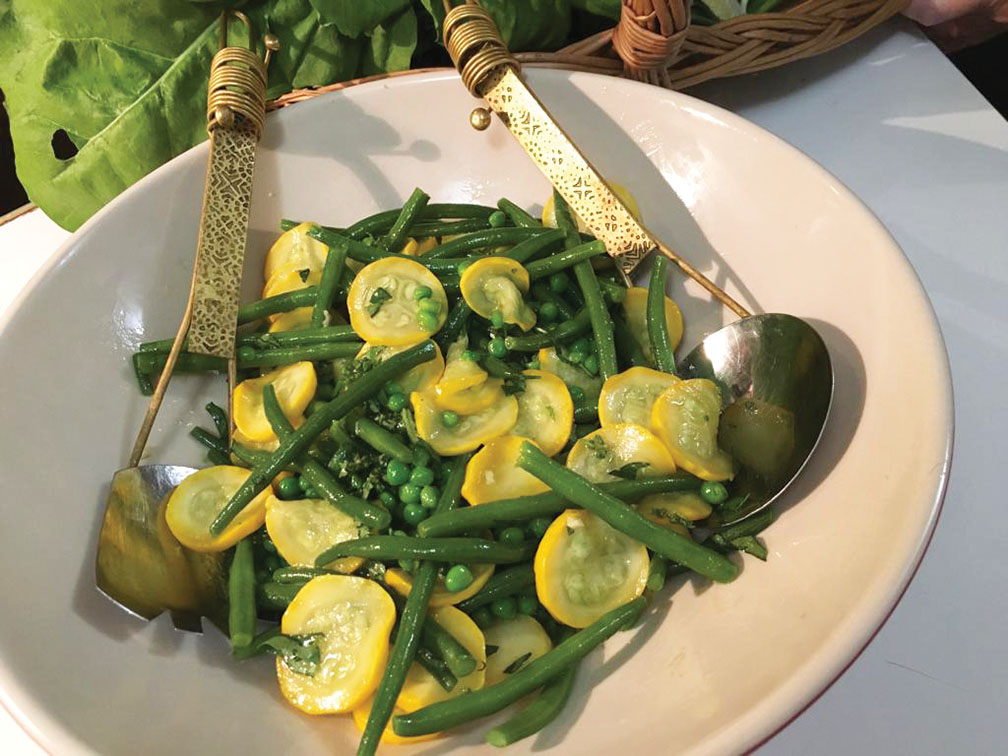