The modest footballer is delighted he could lead his talented team to U21 A divisional championship success for the 12th time in their history, which ensures they join previous celebrated and victorious Rossas teams in the history books. Dylan was always confident this year’s team were contenders for divisional glory. “It is a great achievement for the lads, the club and I. You’d know from talking to people it’s a very tough competition to win and it is a trophy every club is pushing hard to win. It was great to come up a grade this year and surprise people by winning the competition. We always knew we were capable of it, so it’s nice to get the rewards for all our hard work throughout the year.”

It represented a proud moment for Dylan personally to lift the Liam Farr Cup on behalf of his great friends and playing colleagues within the O’Donovan Rossa U21 panel. “I don’t think there’s any better feeling than being a winning captain for your club and lifting the cup surrounded by your friends and family. It was a great honour to be selected as captain of this team, but as seen in the final and previous games we have a lot of leaders on the pitch, which makes my job as captain pretty easy. It’s a great competition to win, with a lot of great teams going on to win it in the past. It also shows how tough it is to win, as Skibb had not won it since 2011.”

The Skibbereen based team won the final against a gallant Dohenys team in very dramatic fashion. Rossas super sub Jamie Hourihane emerged their hero when he netted in the second minute of injury time. This propelled his side to a two point win. Dylan is full of praise for the role Jamie played in their grandstand finish. “There is no better way to win a game. I am delighted for Jamie. He is a very young lad, only 17-years-old. He came into a game of that importance and he possessed the calm presence of mind at that time of the game to score the winning goal. This shows how good a footballer he is and he’ll certainly be one to watch out for in the future. Elliot Connolly was one one of the players of the championship in my opinion. His frightening pace hurt teams in every game and he played a huge role in the winning goal when he rounded a few players. He also made his senior championship debut recently. He will be a very important player for Skibb in years to come.”

Defeat was very tough on a very strong Dohenys team who contributed immensely to a thrilling final. They contained a series of talented players, which augurs well going forward. Dylan is confident the talented Dohenys underage players will progress to adult football and enjoy success in the near future. “Dohenys have some very good footballers. Mark Buckley and Fionn Herlihy in particular are very good players and they probably find themselves most unfortunate with the final result the last day. We’ve been on the other sides of results like that. I’m sure they will bounce back and will be competing for U21 titles in the years to come.”

A huge factor in the Rossas championship success this season was the determination within their group and their winning mentality, which played a huge role in their last gasp triumph. Dylan was always confident his teammates would triumph despite their perilous situation with full-time approaching. “You’d always have to believe that you’re capable of getting another score, but with time up and the ball up the other end of the pitch you’d start to wonder alright. The lads did unbelievable work to get the ball up the pitch and of course it’s unbelievable when the ball hits the back of the net. It’s a weird one because everyone is celebrating, but you also have to concentrate and stop the Dohenys from going up the pitch and scoring again. In the back of your mind however, you know something incredible has just happened.”

Dylan maintains a big reason in their championship success this season was their physical approach, which combined with their delightful football skills, meant they possessed a very successful formula. “I think training the U21 team and the senior team together has really progressed this team. A lot of people have said we are a very physical side, which is unusual for a Skibb team and I think that’s down to training with the older lads. This is the third West Cork title this team has won together so we’ve become quite close over the years and we know each other games fairly well at this stage. We’ve great subs to call upon also, as can be seen by the impact of Jamie the last day. We’ve a few injuries at present and when those players come back we’ll be even stronger again going into the county series.”

Dylan who took up playing football at the age of six, was thrilled to achieve championship success with his close friends and playing for his beloved O’Donovan Rossa. “It was a great feeling to win it with all my friends. They are all fellas I’ve been playing football with since the age of six. It is great to get the reward for all the hard work you’ve put in as a group all the way up. Playing for the Rossas is a great honour. It is a club with a great history. They have achieved a lot of success in the past and I suppose now we are trying to emulate that success at U21 and senior level. A lot of coaches have played their part in the success of this team with a lot of work put into us throughout the years. I suppose we wouldn’t have been that successful when we were younger, but the coaches always stuck with us and now we are seeing the rewards for that. We have a lot to thank them for.”

The O’Donovan Rossa U21 footballers have come a long way over the past 12 months. Last season, they won the U21 B divisional championship title. Dylan acknowledges their success last year helped in terms of confidence and team unity going into this year’s U21 A championship. “We’ve come along way in the last two year. Success in the B championship last year played a huge part in that. We had some incredibly competitive games last year, which really stood to us. We were very disappointed not to win a county last year. We had a five month break between the quarter-final and semi-final which ensured it was very difficult to keep the interest and it probably cost us in the end.”

Dylan and his colleagues will be hoping to enjoy more success in the county series this season. “The county will be another step up again from the West Cork Championship. We will make a big push to get as far as we can in that competition. Playing senior with a good chunk of the group that won the county title in 2011, is bringing us on loads. Hopefully we will enjoy a successful campaign.”

The ace forward is also a key member of the Rossas senior team who began their championship campaign with a comfortable win against Carrigaline. Dylan is hopeful of a good season for the senior team. “It was great to get our first win in the senior championship. We’ve had a few poor seasons in recent years since we made the county semi-final, so we are hoping to get a good run going this year with a lot of the U21 team now being brought into the senior set up. With the mix of older and younger lads this year, the team has great potential to do well.”

Dylan, age 20, has a very bright future ahead of him. The classy playmaker possesses a wide range of key footballing attributes, which should enable him carve out a very successful sports career. His sharp footballing brain, unerring accuracy and incisive link up play with his colleagues have earmarked him as a player with a very special talent. The second year Arts student in UCC is very grateful for the role his family have played in his GAA journey. “My family have always supported me all the way up whatever sport I was playing. A lot of hours have been put in to bringing me to and from training sessions and matches. I am very grateful for their support and the role they have played. I have great appreciation for everything they’ve done for me down through the years.”

Suzuki Vitara is lively about town

Wed May 8 , 2019
Suzuki is the latest car company to shun diesel and concentrate on petrol engines. Their new Vitara, which I drove recently is only available in a 1.0-litre and 1.4-litre petrol engine. The Japanese company has a loyal following in Ireland, with an age range reported to include first time buyers […] 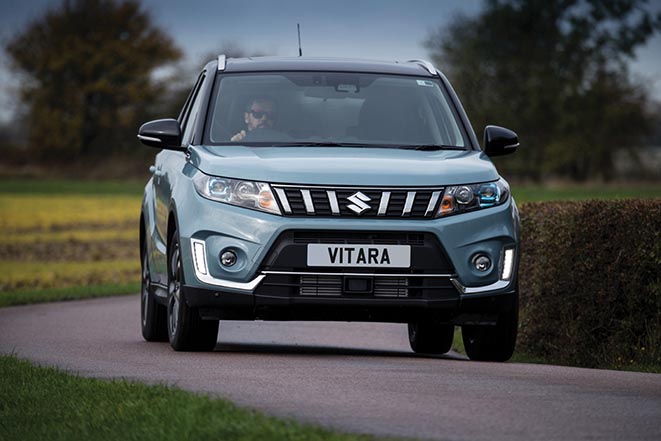