West Cork has long drawn the creative talents of writers, musicians and craftspeople to its shores from all over the world. This diversity is what makes the area such a culturally rich and vibrant place to live – a place where the community is renowned for the warmth of its West Cork welcome.

It was this welcoming community – this, and the promise of a warmer clime than elsewhere in Ireland – that attracted professionally trained violin makers Andrew and Caitlin McGinn to West Cork. After finding a little two-up two-down 130-year-old cottage badly in need of repair just outside Dunmanway, the American couple set up shop here – a full service violin shop.

In a little workshop in the heart of the West Cork countryside, new life is breathed into worn out instruments and new instruments are born, crafted with love and skill at McGinn’s Violins.

Andrew and Caitlin met at the Chicago School of Violin Making, where they learned traditional methods of violin construction, as well as instrument repair and bow rehair. They both continued their studies apprenticing with master luthier William Whedbee and have attended violin-making workshops led by Joe Thrift.

Prior to developing a passion for instrument making, they had both dipped their toes in other subjects, Andrew in politics and also carpentry, Caitlin, a talented cellist, in construction studies.

Disillusioned with the loss of community spirit driven by the rise in capitalism in the US, Andrew and Caitlin decided to set down fresh roots in Ireland. Caitlin had lived in Ireland for several years prior to going to school in Chicago and she felt more at home here than in the US. It now feels like home to Andrew too.

The farmer who farms the fields surrounding their home calls regularly just for a chat. The hay that feeds their goats is exchanged with their neighbour for eggs from their chickens. Caitlin also keeps bees and grows vegetables. They renovated their home and workshop themselves. It’s a simple but satisfying way of life.

“You don’t get that sense of community in America anymore,” says Andrew. “Unfortunately due to corporate greed, the lifeblood of rural America (industry and agriculture) has been taken away – the industry to countries where the labour is much cheaper and the agriculture has been consolidated. People are either fleeing the countryside or living in abject poverty.

“I’ve met more people in this country whose name I remember and they remember mine, more people here that I have friendly or neighbourly relationships with than I ever had in America.”

“The lifestyle in the States is very much focused on making money and putting work ahead of having a life really,” says Caitlin. Politically it seems to be going more downhill every day. It’s something I care about…equality and society…I hate to see the way the country is going.”

Of course there are downsides to moving all this way across the Atlantic. Andrew grew up in a multi-generational household in the States and this is something he really misses. However, the couple are expecting their first child in December and are looking forward to creating a family of their own and expanding their network of friends within the community here.

“Many of our neighbours are older and wiser,” says Andrew. “We feel very comfortable asking them for advice or help when we need it.”

The couple also enjoy being active in and contributing to the local community. They’ve had a stall at the Clonakilty Old Time Fair demonstrating violin making for the past two years and they are very involved in the local national school, Kilmeen. Over the next five years, they aim to build a small playable harp with the school children and while doing that teach them how wood applies to musical instruments, sound, woodworking and so on.

The pace of life and work just outside Dunmanway is slow and steady: It takes time to build an instrument from scratch – two months a violin, four months a cello.

McGinn’s Violins welcomes musicans seeking experienced repair and set up work or who would like to commission their own mcGinn instrument.

Tue Aug 6 , 2019
This August’s exhibition (August 6 – September 6) at the Award winning Etain Hickey Collections shop and gallery (National Best Shop Front Award and Home Store Winner Irish Made Awards, Irish County Magazine 2018) is a group show of Irish Makers and Artists who have made work for the theme […] 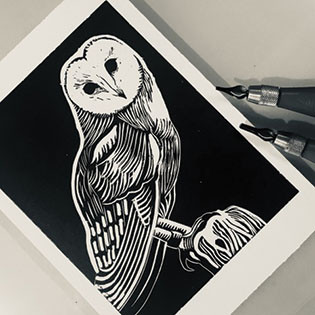