Ballinascarthy camogie club recently launched their 50th anniversary celebrations which will be taking place in the coming months. At the launch were some of the original players from the very first team in 1969, when the club was called Castleview. These players, along with players from the following five decades, are currently writing down their memories of playing camogie and their anecdotes will be compiled into a book that will be launched at the celebrations in spring.

Ballinascarthy camogie club enjoyed a very successful season last year. They won the Junior B county final and the West Cork Junior Cup. The progressive club are holding a victory dinner dance in the Fernhill House Hotel on Saturday, February 2, when the team of 1969 will be introduced on the night. John Bohane catches up with club official Kate Crowley, as she reflects back and looks forward to a bright future for the club.

The launch night, which was held last November to celebrate the 50th anniversary celebrations was a huge success reveals Kate, as past and current players gathered together to celebrate the special role the camogie club have played in their community down through the years. “It was a very special night in the Community Hall when they launched the celebrations for the 50th anniversary of the club. Several of the original players on the 1969 team, as well as players from the ‘70s met up and they really enjoyed going over the old stories from 50 years ago. As part of the celebrations in the Spring, a book of camogie stories is being compiled, which we hope will be both interesting and entertaining, as players remember their youth playing with what was then Castleview camogie club. These players are all getting together, with all past and retired players over the 50 years, at the forthcoming dinner dance.”

The gathering of all the players from the very first team in 1969 was a huge success as the players quickly caught up with funny stories and a very nostalgic catch up. It was also tinged with sadness as they thought of the players who are now sadly departed as Kate revealed. “The launch night dusted off the cobwebs and the stories and laughter was amazing. Naturally, a quiet moment was cherished for all the ladies that are no longer with us. Ar dheis Dé go raibh a h-ainmneacha dilís. The night unearthed a huge amount of emotion, history and some tall tales too!! Life certainly seemed a lot more easy-going back then.

“The club started off life as Castleview in 1969 but like most clubs at the time, they found it difficult to get funding to stay alive, so a bit of lull came in the late 70s. Thankfully a resurrection came about in the mid 80s and the club re-emerged as Ballinascarthy due to the interest in the village in camogie.”

Ballinascarthy camogie club are very fortunate to possess diligent administrators such as Kate. The modest club secretary plays a vital role in the continued progress of the ambitious club. “I am the club rúnaí for the past dozen years or so, but am happy to row in anywhere needed, be it underage training or organising fundraising events. We have a vibrant, varied committee, which is very gender balanced! I am happy to be involved. Most of us have daughters playing and I suppose with all the success in 2018, we can honestly say the club is going from strength to strength.”

A big crowd is expected to attend the victory dinner dance on Saturday, February 2. Kate is eagerly looking forward to a great night in the Fernhill House Hotel. “It is a victory night out for the camogie club but also very much a community dinner dance, with all local clubs supporting the night. Tickets are selling well, thanks to the camogie club, the former camogie players, GAA, ICA, hall committee and festival committee. Everyone is very welcome on the night. It is vital that everyone enjoys the night, as meeting up and supporting each other is very important in a rural community like ours.”

A lot of proud club personnel have played huge roles in maintaining and supporting the club since it was established back in 1969. The dinner dance and the book intends to pay tribute and acknowledge the key role so many club patrons did to ensure the club started out initially and is now thriving. “Lots of great work has gone into the club over the years. 1969 is a long time ago now and the book will bear testimony to the changes that have occurred between then and now. Our coaches, mentors, committee members, parents and most of all the players, deserve great credit for their commitment and dedication over the years. Clubs don’t survive on fresh air. It takes hard work for any club to run smoothly and grow at the same time. Generally we try to keep our retired players still involved in a different capacity. Their experience is invaluable to us.”

Club membership within the camogie club is very strong at present and the success the club enjoyed last season should ensure more young players join the club this season. The support the club enjoys from the community is a huge boost revealed Kate. “Membership of the club is steady in a positive way. We don’t have a national school in Ballinascarthy, so we are always working hard to encourage girls from the neighbouring schools to join us. Our fantastic facilities are a great selling point. We also hold indoor training sessions every Tuesday evening in the hall from 6.30-7.30pm for all national school going girls and that is a huge success. Most parents are delighted to get their girls off the gadgets and out there exercising.”

Last season will go down as one of the most successful in the club’s history. The club enjoyed an historic double which was just reward for the hard work the players and their coaches put in all year. Kate was delighted with the 2018 season. “Winning the Junior B County final on the last day of September against Bride Rovers, by the narrowest of margins, was the highlight of recent years. The success we have enjoyed at underage level shone through. Winning the West Cork Junior Cup also last season after a great game against St. Colum’s was also a great triumph. It seemed all our stars had aligned perfectly for once! This was all down to the hard work put in by the coaches Micheál McCarthy, Francis O’Driscoll and co-ordinator William McCarthy. It was all a team effort. We had won the Junior C title back in 2011, so seven years was a long wait for Junior B success. For some of our girls, the two medals they will be presented with at the dinner dance will be a special moment as they have not won in these grades previously.”

Not content to rest on their laurels, the Ballinascarthy junior A team are looking to build on last year’s success and enjoy another successful season. They are already back training hard in pursuit of more glory this year. “We are getting prepared for what awaits us in the Junior A grade. We are looking forward to the challenge and hope to go out there all guns blazing. Gym sessions have already started with all girls eager to contest for a place on the team. We have very good mix of talented young players, which combined with the experience of the more mature players, we feel gives us a good mixture with all the ingredients needed for further success.”

Ballinascarthy camogie club have, down through the years, provided a plethora of players who have represented the various Cork inter-county teams with great distinction. Ace club player Moira Barrett was the captain of the victorious Cork minor championship team last year. Kate is delighted Bal keep providing players for the Rebelettes. “We have had great ambassadors for the club down through the years who have also played for Cork. We are confident this trend will continue into the future. Last year we had Claire Kingston who captained the Cork U16 A team to Munster glory, as well as Caroline Sugrue who won both league and championship medals with the Cork intermediate team. Moira Barrett is terrific, her energy and speed is amazing. She truly is captain material. We had great celebrations when she brought the Cork minor team and All-Ireland Cup to Bal last summer. The village was festooned with flags and balloons. It was a wonderful occasion and very inspiring for all our own club players.”

The huge supportive role the local community have played in the success and lonegivity of the camogie club cannot be emphasised enough revealed Kate. Their continued support and enthusiasm towards the club ensures the club goes from strength to strength. The club provide a great sense of pride to the community. The players are great ambassadors for their village. “Our local community is the hub that the camogie club thrives on. Our girls are invariably involved in all our locality, in the GAA club, Foróige club, festival and hall committees, Macra, ICA association. This is what knits our community together. Further afield from an international perspective, it is very important to acknowledge that UNESCO have recently preserved the game of camogie. I feel we are in safe hands for the next generations.”

The close relationship they enjoy with the Ballinascarthy GAA Club also helps to ensure the camogie club enjoy very good training facilities which enables their players to continue their progress and development. “Ballinascarthy GAA have always been more than generous to their sister club, the camogie. We are indebted to them for the use of the two fantastic pitches in The Henry Ford Pairc, for the ball alley, astro training pitch and for the excellent gym in the village. It is a marriage that we hope will last a long time. We share a combined lotto draw weekly as well as the Cúl Camp during the summer. We share the facilities with our local schools for Sciath na Scol matches also, this sharing ethos can only breathe positivity and renewed energy into a community. Our facilities are as good as anywhere in the county. When Cork teams come down to train or to play a challenge match, they marvel at the wonderful facilities we have here in West Cork.”

The ambitious club have very specific goals they hope to achieve this year, which would commemorate their 50th anniversary nicely. “We hope to make 2019 as good and successful as last season. We are very aware that success isn’t always easy to repeat on an annual basis. I feel certain however, that our girls will die trying. Long term, our wish would be that our camogie club will always have plenty of girls, trainers and mentors. I am also hoping the health and happiness it brings will be a light that will never extinguish. We also have several girls who play senior camogie with the Carbery division. They have traditionally always put it up the the city teams, so to win a senior county title would be a wonderful achievement.”

‘Progress through technology’ with Audi

Mon Feb 4 , 2019
I have often said on these pages that colour is so important when choosing a new car. In December I met a colleague who was driving a new, but dirty-looking black Audi A6. It could have done with a wash after a few days driving on wet country roads. Then last […] 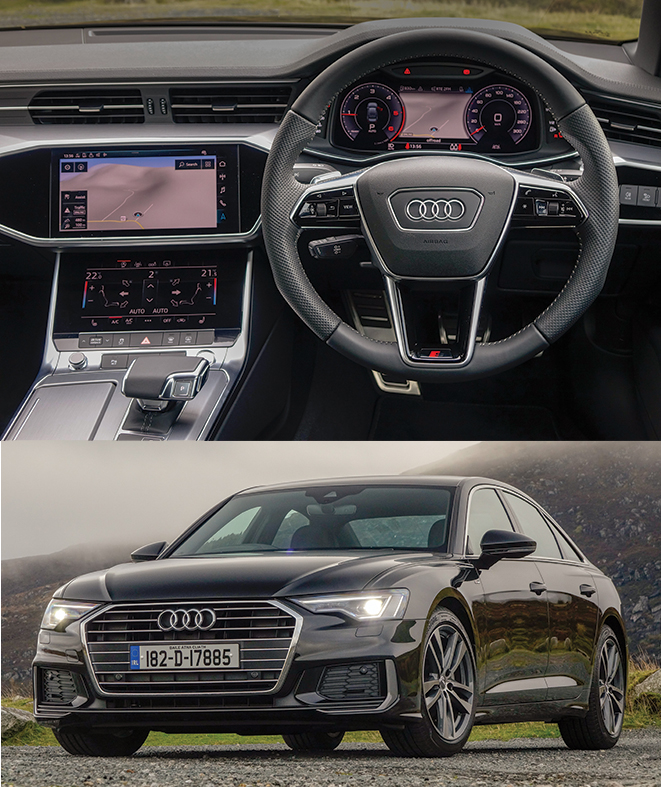