Whenever there is stormy weather I’m more strategic with where the cows and calves graze. Strict grazing rules get glossed over and the priority becomes working out which ditch offers more protection from the wind. I’m very glad of the weather apps on the phone for events like Storm Hannah or that windy wet weekend we had in mid-April. With very localised weather predictions it allows you plan a bit more than a general weather forecast would.

I love heading out to the field overlooking the sea on sunny days. I enjoy them on the wild windy days too, although I don’t hang around to take in the scenery as much. That can be done from the warmer vantage point of the office window. When those white horses dance, I’m glad it’s farming and not fishing that’s my day job.

Beef prices have been stagnant for almost six months but there was a glimmer of hope towards the end of April, as prices finally started moving upwards.

Traditionally prices would begin to rise gradually in March and peak at some point in May. Factories are still offering a base price of €3.75/kg for steers and €3.85/kg for heifers, however regular sellers and large-scale finishers are securing 3c/kg to 5c/kg higher.

The high export numbers of dairy bull claves will come as a relief to beef producers here, as it removes a large proportion of finished cattle in the future.

Calf exports stand saw a lift of 32 pc with 111,059 exported to date in 2019 compared to 84,285 for the corresponding time last year. The latest figures from the Department of Agriculture showed Dutch veal farmers in particular took advantage of a €25/hd drop in average dairy calf prices this year, to buy more Irish calves.

The fact there has been a reduction in dairy cow numbers in both Holland and Germany also created a vacuum that Irish calves were able to fill.

The other key market for Irish calves is Spain. Exports there in 2019 are running 15 pc ahead of last year. Last year calves to Spain totalled 72,978 head.

There has been no budge on price for milk supplied in March for West Cork dairy farmers.

Dairygold announced it will be holding its base milk price at 29.6c/l, excluding VAT.

You wouldn’t think religion would have much influence on Irish farming in this day and age but you’d be surprised. The timing of two religious festivals in the coming years could spell good news for Irish sheep farmers.

For the next five years, Easter and Ramadan will be only two weeks apart.

Both religious festivals, one Christian and the other Islamic, are important drivers of demand for lamb and having them close together in the calendar should help drive prices over the next few years.

The first of the new season spring lambs are coming fit for slaughter and prices in the region of €6.60 to €6.80/kg to 21kgs carcass are expected.

The fact the sheep kill to date is back almost 100,000 head on last year, points to very tight supplies and this should have a positive impact on prices.

Back to the homefront

There was 72 pc of the herd calved in March so that was a hectic few weeks.

I was fortunate enough to get a run of 25 calvings in a row that didn’t need assistance. This was broken by a set of premature twins. The first landed perfectly, the second needed a small bit of help. When standing the smallest was just above my kneecap but they are a super pair to thrive now. They weighed 18 and 21 kgs respectively. There’s probably dogs heavier than the two combined.

Calving numbers were at their lowest for a number of years. This was not by choice but by letting nature call the shots. Twenty heifers will go to the bull this year and there’s no voluntary culls this year. The post breeding scanning in summer will decide who stays and goes for 2020.

In the past, breeding would have commenced here by now. It will be the middle of May before the bull goes to the heifers and about five weeks until breeding commences for the cows.

This year’s breeding plan will consist of a young polled bull with the heifers, AI on the main group of cows for three weeks followed by a bull running with them for a few weeks and a bull will run with the younger cows on the out farm.

The paddock that held the out-wintered cows was reseeded using the stitching method. This requires minimal tilling of the soil. To explain it simply, a seeder on the back of the tractor opens the soil, drops a seed and covers and rolls it with minimum fuss. This field got a mix of grass, clover, chicory and plantain. It’s an on-farm experiment, which started last year when I used the mix on some paddocks. That is starting to show more prominently this year so it will be interesting to see how it goes.

The replacement heifers are gone to the out farm and the first group of younger cows has followed. There’s another few to join them but not until they have got their pneumonia vaccine booster.

While grass growth eased slightly earlier in the month it has surged with the recent spell of heat and rain. Combined with consistent growth throughout a relatively warm winter, it means the first run of silage isn’t too far away.

My farming year can be broken into a few phases rather than seasons. Winter routine feeding, calving, breeding, silage, the quieter spell, weaning and back to winter-feeding routine. It’s simplistic enough in some ways yet if I broke it down, I’d probably end up suffering from the centipede effect. Can you imagine if a centipede had to think through every movement in every leg? A farmer could end up doing the same if they delved into all the processes that makes a farm tick. Imagine going through all the mechanical, scientific and technological happenings. It would fill a lot of pages that’s for sure. For now I think I’ll focus on the breeding and silage, as they are next on the agenda anyway.

Time for a seasonal change

Tue May 7 , 2019
Photo : Tagliatelle with Asparagus and Shiitake Mushrooms I’m just about all ‘kaled’ out. We have eaten some amount of kale and spinach in the last six weeks and I am almost happy to see the plants bolt. We will miss them but the new baby salad leaves and rocket […] 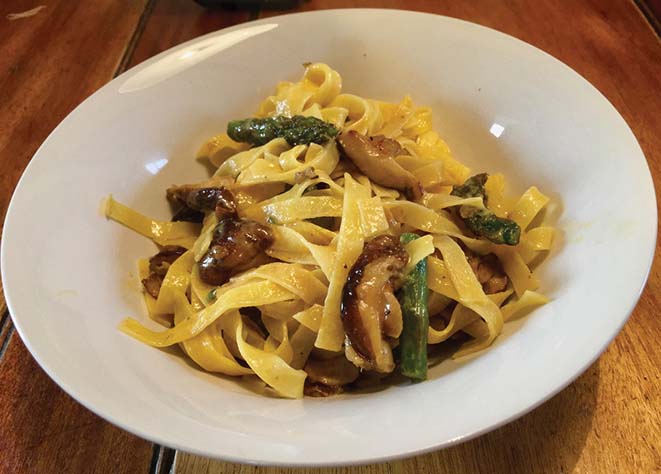